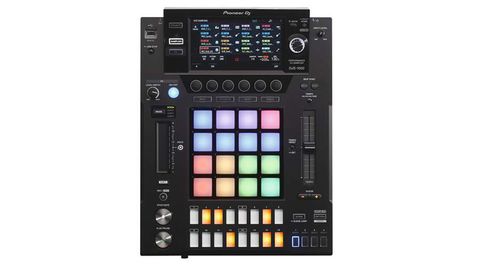 The DJS-1000 bridges the gap between DJ and studio better than anything else on the market right now.

The Toraiz SP-16 sampler was a bold new direction for Pioneer DJ.

For a company which produced gear aimed squarely at the DJ booth, the SP-16 was a sharp left turn into studio territory; closer in design to classic standalone MPCs than Pioneer’s usual DJ player fare.

Despite this, the SP-16 impressed us. There were a few missing features at launch, but subsequent firmware updates have fixed a number of these issues and the machine stands up as an intuitive and inspiring hardware sampler, even in the face of some strong competition from the likes of Elektron and Akai.

Now Pioneer has followed it with the DJS-1000, another standalone sampler, which shares the basic DNA of the SP-16, but heads back to the DJing domain. The core features of the DJS-1000 will be instantly familiar to anybody who has used the SP-16. As before, we get 16 channels which can each be loaded with one-shot samples or loops, with a maximum length of 64 seconds each. Each track can also be assigned as a MIDI output or a Thru track, for processing incoming audio from an external source.

These 16 channels are then played and controlled via the 16 velocity sensitive performance pads and a 16-step button sequencer. The pads have multiple modes, allowing them to trigger samples, mute/solo sounds, slice loops and play samples across a multitude of scales. The sequencer, meanwhile, has four chain-able variations, letting users create sequences of up to 64 steps. There’s also a touchstrip, which can be used to trigger beat repeats or manipulate pitch, and also has two assignable User modes.

The main difference between the DJS-1000 and its predecessor lies in its form factor. Here everything is built into a chassis that matches the shape and size of Pioneer DJ’s Nexus CDJs, meaning it will sit nicely in a DJ booth alongside standard mixers and players. The move towards DJ use is more than just aesthetic though; here the transport controls have been changed to CDJ-style buttons, and we gain a tempo slider and timing nudge buttons, allowing users to beat-match with the 1000 in the same way as you would with a traditional vinyl deck or CDJ.

A few of the more studio-centric features of the SP-16 have been removed here too, most notably the Dave Smith analogue filter. Here, that’s replaced by a multimode, one-knob master effect, which can be set to control one of eight DJ-style performance effects, covering filtering, bit crushing, pitch effects and reverbs. The heft of that analogue filter is certainly missed, but this multieffect does suit the DJ-stylings of the 1000 more. The DJS-1000 also lacks the assignable outputs of its predecessor (see Ins And Outs).

As with the SP-16, editing duties are handled by a full-colour 7-inch touch screen, which is accompanied by a bank of six rotaries which allow for finer parameter edits. Pioneer DJ has done an excellent job of making the software architecture feel intuitive and easy to use. The process of building beats, sampling, looping and performing with the DJS-1000 feels exceptionally natural. Most parameters are easy to locate, and everything is laid out in a logical manner, meaning that you’re unlikely to find yourself reaching for the manual mid-performance.

The DJS-1000 loses the six additional assignable outputs of its predecessor. Here we get a main RCA output, plus a secondary stereo pair of output jacks. Sadly, you can’t route individual tracks to this secondary output, but it can be set up as a Thru out, which directly outputs the audio signal coming through the input. Befitting its CDJ-styling, the headphone outputs on the DJS-1000 are along the front edge, and the unit has both 1⁄4-inch and mini-jack sockets. Input wise, we get a stereo pair of 1⁄4-inch jacks. There are also MIDI in and out/thru ports on the rear. It also features Pioneer DJ’s LAN-based Pro DJ Link tech. This allows multiple unit/CDJs to be connected via a LAN hub, for a tight sync setup that makes it easy to switch between master clocks on different units.

The DJS-1000 also has a top panel USB port for connecting a flash drive, which acts as the main input for importing samples and loops. The DJS-1000 uses this USB port to save recorded samples and projects, so it’s worth noting that you’ll need to have a drive plugged in to save captured sounds and for backing up projects.

The flipside is a slight lack of depth, compared to similarly-priced samplers. The Elektron Octatrack and Akai MPC Live offer more advanced editing and effects capabilities, and more flexible connectivity.

It isn’t totally lacking in the sound-shaping department though - there’s still decent level of sample and sequence editing on offer. Each sample track gets a row of parameter ‘modules’, which control sample/loop playback, amp envelope (a three- stage attack, hold, release setup) and an insert effect slot. Thru tracks, meanwhile, strip this row of modules back to just the effects slot, while MIDI tracks get modules to control MIDI note settings and two assignable CC outputs. There’s also a secondary type of MIDI track, designed specifically for control of Pioneer DJ’s own AS-1 monosynth, which allows synth presets to be controlled from the DJS-1000’s screen.

All tracks also have a multi-shape LFO, which can be routed to a generous range of track parameters. The software features an audio editor onboard too, used for manipulating recorded or imported sounds, which does a solid job of balancing flexibility with ease-of-use.

On the sequencing front, we get a decent amount of flexibility too. This includes the ability to nudge individual steps off the grid for looser timings, add repeats and rolls, and automate sound parameters for each step. Users can also record patterns live by hitting record, and have them captured by the sequencer, including any manipulation created using the touchstrip into patterns.

A few of the features could use fleshing out though. The track effects offer a range of ten insert effects covering delay, EQing, filtering, distortion, compression and modulation effects, but reverb at track level is an odd omission that’s sorely missed when building beats. An assignable envelope for the track’s filters would also be a great addition. Having just a single effect slot per track can feel a little limiting too; you can’t, say, combine EQ and compression, or any other two effects.

‘Studio’ depth isn’t really the point of the DJS-1000 though; this is a sampler built to be performed with, and so its intuitive, fluid workflow is its greatest strength. Design-wise, Pioneer has made great use of recognisable tropes - the CDJ-style transport controls, X0X-like sequencer, MPC inspired pads - to build an instrument that should feel familiar to most DJs and producers. As a result, the DJS-1000 doesn’t feel like a daunting machine to experiment on, and it fits the brief perfectly as a tool for DJ/producers to incorporate into their sets, allowing even the most traditional DJs to add interactivity to their sets without having to learn an entire new method.

For this purpose, the excellent Live Sample feature is a highlight. This is a well-implemented tool that allows users to quickly grab loops from the sampler’s inputs simply by tapping a free pad. Loop length is quantised to the master tempo, with the duration adjustable via the DJS-1000’s interface. It’s fairly straightforward functionality, but it makes it easy to grab, say, a vocal loop from a CDJ or vinyl deck, and start live remixing on the fly. Combined with the Slice and Hot Slice modes, there’s plenty of quick editing functionality.

While the DJS-1000 works best onstage, we could see it in the studio too. It’s so easy to throw together simple sample grooves, club-focussed producers will love it for building beats and loops. Compared to the SP-16, the lack of assignable channel outputs does hinder it, but there is an option to render selected tracks (or the master output) as a WAV file, making it fairly easy to transfer patterns to a DAW. All that we’d like added on this front, ideally, would be an option to render all tracks as individual WAVs, so you don’t have to individually select and render.

On the whole though, there’s a lot to really like about the DJS-1000. Although it’s fundamentally not that different from the SP-16 before it, the slight changes in form factor and functionality make the DJS-1000 feel like a proper hybrid between Pioneer DJ’s heritage in the booth and its contemporary studio ambitions.

The gap between studio gear and DJ tech has become increasingly narrow over the past decade, as DJ players and software have incorporated deeper sampling, arrangement and effect tools, and creative performance hardware has become more accessible. Of everything on the market right now though, the DJS-1000 is probably the best example of gear that unifies these two worlds - interactive enough for performers, but still offering depth to tempt studio musicians.