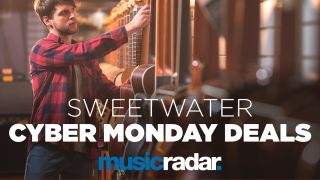 Update: Sweetwater have extendced their sale to 5 December, but within that, individual products are selling out and/or have their own sale periods, Don't miss out!

Cyber Monday 2019 is here, and that means a big opportunity to get a great deal on a new piece of music-making gear. One retailer that offers a massive range of products is Sweetwater, and it's gone big on savings on some top quality gear.

Whether you want a new guitar, bass, electronic drum set, MIDI keyboard or audio interface, Sweetwater will almost certainly have a deal that's in your wheelhouse, and MusicRadar is bringing you the very best of them.

Many of the deals we're posting are selling out fast, so we'll be updating this hub around the clock. If you see a deal you like, it may not last long - get involved!

Vox AC15 hand-wired tube amp: $600 off at Sweetwater
Hurry and get this AC15HW1G12C combo for almost half-price right now at Sweetwater. Famous for its boutique vintage flair and rich sense of history, this tonesome Vox combo won't hang around for long.View Deal

MXR EVH 5150 Limited Katakana Edition Overdrive Pedal
Get the legendary Eddie Van Halen overdrive tones and the some of the best hi gain metal sounds around for just $129.99 in the Sweetwater Cyber Monday sale.
View Deal

Novation Launchpad X: $169.99 at Sweetwater
Still the king of affordable Ableton Live pad controllers, the Launchpad X comes with an upgraded feature set and feels better than ever. At this price, it's cheaper than ever, too, and comes with a free sleeve, too.View Deal

Novation Launchpad Mini mk3: $94.99
A more compact version of the Launchpad, this one comes with RGB LEDs on each of its 64 pads and an optimised workflow. A $15 discount and a free sleeve make it a fine buy.View Deal

Moog Sub Phatty: was $799, now $549.99
A truly stimulating instrument that punches above its weight to live up to the Moog legacy and hey, it's an absolute snip at this price.View Deal

Moog Grandmother: was $899.99, now $799.99
A fine semi-modular synth with genuine Moog pedigree. You might just consider selling your grandmother to get one... especially at this price.View Deal

Moog Mother-32: was $599.99, now $499.99
Moog has delivered an exciting entry point into the world of patchable analogue synthesis and you can get $100 off the price at Sweetwater.View Deal

Save $160 on Way Huge's Camel Toe MKII Triple Overdrive
Supercharge your overdrive tones with Way Huge's flagship pedal at under half price in the epic Sweetwater Cyber Monday sale.View Deal

Get $500 off Supro's 1650RT Royal Reverb guitar amp
If you want power, style and classic tones in one affordable package, then this amp is for you. Killer features include tube-driven tremolo and spring reverb, plus Supro's ace blue rhino hide tolex covering.View Deal

Get 15% off select Wampler effects
Make savings on everything from the Tumnus Transparent overdrive to the Faux Tape Echo V2 delay. Click to explore the full range of discounted pedals.View Deal

Save $34.50 on the Diezel VH4
You want distortion? You got it! Get wide ranging controls for gain, treble, middle and bass, plus presence, deep and master controls to help you shape the low-end and mid-range bite.View Deal

Save 15% on Bogner effects
Bognor pedals don't come cheap, but if you've had your eye on one, now could be the time to strike with big money to be saved on drive, fuzz and compressor pedals.View Deal

Save 15% on a range of Matthews Effects
There are five Matthews pedals up for grabs in the Sweetwater sale, including the Astronomer V2 Celestial reverb, Whaler V2 Fuzz and Chemist V2 Atomic Modulator.View Deal

Save 15% on J. Rockett effects and power supplies
J. Rockett is offering the biggest selection of all the brands here, with prices ranging from $67.15 for the Audio Design power distributor up to $211.65 for the Tim Pierce signature overdrive.View Deal

Save 15% off JHS pedals
You don't need much cash to take advantage of the massive JHS discounts. $29.75 will score you a funky red foot switch, while $46.75 will get you a killer kill switch.View Deal

Save 15% on Keeley pedals
Robert Keeley's handcrafted American pedals are widely regarded, so any opportunity to get money off a D&M Drive, a Dark Side Workstation or any of the other pedalboard powerhouses featured is a good deal.View Deal

Roland TD-17KV e-kit: just $1,199.99, with a FREE drum mat
The TD-17 range hits the sweet spot in Roland’s V-drums range for features, sound and playing experience at an affordable price. Today, the KV edition is $129 off and comes complete with a free drum mat. An unmissable deal!View Deal

Roland TD-25K: $1,999.99 @Sweetwater + free $200 gift card
This e-kit deal is an absolute steal, considering it was originally $2,778.99. A cutting-edge piece of kit for home practice and home recording, the TD-25K features all the power of Roland’s flagship drums in an affordable package. You can use your $200 gift card to pick up some sticks, headphones or a new amp, too!View Deal

KAT Percussion KTMP1 drum pad: $20 off @Sweetwater
Kickstart your exploration of hybrid drumming for less than $100 right now with KAT’s versatile, budget percussion pad. Cue one of the 50 built-in sounds, play with sticks or hands and connect a kick drum trigger and a hi-hat controller for hours of experimentation.View Deal

Epiphone Les Paul Custom Pro Koa: was $649, now only $529
Easily one of the most versatile electric guitars ever to bear the Les Paul logo, available in a mouth-wateringly rare natural finish.View Deal