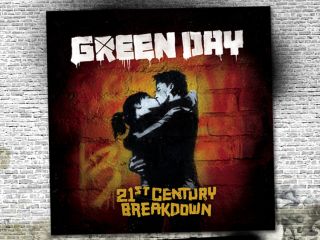 Following Green Day's 21st Century Breakdown announcement at the Grammys this weekend, the band have unveiled its accompanying graffiti-inspired artwork and a taste of what to expect…

"We asked how much more ambitious can we be?" frontman Billie Joe Armstrong told USA Today. The expectation surrounding the follow-up to the mega-successful/mainstream American Idiot is, after all, huge. "We could take a sideways step or go back to our roots. We chose to move forward," he continued.

Of 21st Century Breakdown's message, however, we can expect more of the same: working-class heroism, the struggles against corporate American, war etc. "It's about reflecting what's been happening the past three years and putting it to melody with some bold statements."

March Of The Dogs

One confirmed track, March Of The Dogs, is about "preying on people's blind faith."

21st Century Breakdown is available to pre-order now, with a release expected in May 2009.