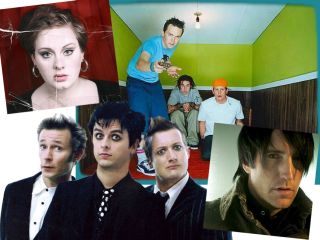 While blogging live from the 2009 Grammy Awards last night, there were a few events we felt deserved a list of their own.

From cocky-Brit winners to Trent Reznor's handbags at dawn, here are the four things we've learned about music this weekend…

Best New Artist Adele gave our favourite acceptance speech of the night, paying tribute to a fellow-Brit and a US counterpart without a trace of irony: "Duffy I love you, I think you're amazing. Jonas Brothers I love you as well."

"Hi. We're blink-182. This past week there've been a lot of questions about the current status of the band, and we wanted you to hear it straight from us. To put it simply, we're back. We mean, really back. Picking up where we left off and then some. In the studio writing and recording a new album. preparing to tour the world yet again. Friendships reformed. 17 years deep in our legacy."

We haven't heard much from Green Day since 2008's studio session previews. So what better place to share news than onstage at the Grammys while presenting an Album Of The Year award to Robert Plant and Alison Krauss?

It's called 21st Century Breakdown and it's all set for a May release. If it sounds like Muse (or Queen) you heard it here first.

4. Trent Reznor was 'robbed' by Radiohead

As well as Best Alternative Music Album, Radiohead's In Rainbows scooped the not-so-prestigious Best Deluxe Packaging award. It beat Nine Inch Nails' Ghosts I-IV, which - according to NIN mainman Trent Reznor (and XFM) - was a serious miscarriage of justice: