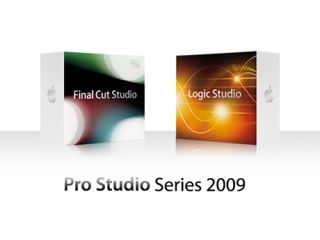 PRESS RELEASE: Gibson Guitar, the world's premier musical instrument maker and leader in music technology is proud to be partnering with Apple for the launch of their Pro Studio Series 2009. The latest releases of Final Cut Studio, Final Cut Server and Logic Studio contain powerful new features that make video production and music creation easier and more intuitive than ever. Combined with Mac OS X Snow Leopard - the latest version of the world's most advanced operating system - and high performance Apple desktops and notebooks, you get the ultimate studio set up.

Join Apple experts at The Printworks in Manchester on 24 November to experience the latest advances in video production and audio creation on the Mac or in a city near you to learn powerful products in action. George Vjestica lead guitarist with Groove Armada will perform on a Gibson Les Paul Standard Goldtop at all ten Apple Pro Studio demonstrations which will take place in cities across Europe, India and Russia beginning in Paris on 21 October. In addition there will be a separate Gibson demo area at each location to showcase a selection of new Gibson models such as the Gibson Dark Fire and Gibson Zoot Suit SG. To attend this special event in Manchester or any of the other events, please visit http://www.apple.com/uk/software/pro/series/

With more than 100 new features, the new Final Cut Studio advances the art and technology of film making with innovations that help you work faster, collaborate more efficiently and finish brilliantly. Adding Final Cut Server frees up even more time for creative work,with new features that make it exceptionally flexible and easy to use. In the Final Cut session we will follow a project through post production with the new Final Cut Studio and Final Cut Server. Edit faster than ever in Final Cut Pro 7, add excitement to your motion graphics with Motion 4, repair common audio problems using SoundtrackPro 3, grade in Color 1.5 and deliver with Compressor 3.5 - all managed with Final Cut Server 1.5.

The new Logic Studio includes over 200 new features that let you write, record, edit, mix and perform your music. It also comes with thelargest collection of software instruments, effect plug-ins and Apple Loops ever packed into a single box. In the Logic Studio session we will explore everything you need to make great music even better with the most advanced creation and production tools in the industry, including new Flex Time tools that allow you to quickly manipulate the timing and tempo of your recording for the tightest performance possible. Guitarists will see how the new Amp Designer and Pedalboard plug-ins make it easy to re-create realistic versions of the most iconic guitar tones. Learn how Mainstage 2 lets you sound as good live as you do in the studio and see why your Mac is the best live rig you'll ever have.