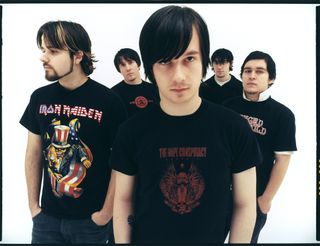 Funeral For A Friend have parted company with their bassist, Gareth Davies. He will be replaced by former Hondo Maclean member, Gavin Burrough.

The band said on their MySpace page: "It's with sadness that we announce Gareth Davies has left Funeral For A Friend. As some of you may know, Gareth has been living in America for the past couple of years, and recently got married.

"Ultimately, the strain of travelling between continents has taken its toll and Gareth made the decision that it would be in the best interests of himself, his family and Funeral to leave the band. We totally respect and understand his choice, wish him all the best in his future and we thank him for being part of our lives for the past six years. We'll miss him.

"We'd like to take this opportunity therefore to welcome Gavin Burrough (Ghostlines/Hondo Maclean/The Future) to the family. Gav is a super-tall, super-talented dude whom we've all known a long time and we're sure you're gonna love him as much as we do.

"Weird fact - Gav was born on the same day as Gareth. AND both their names begin with a G. Crazy stuff."

FFAF release their fourth album, Memory And Humanity, on 13 October.