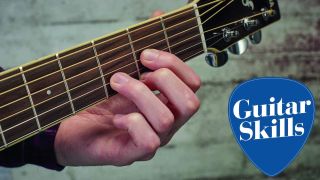 Guitar skills: Chords are a fundamental part of playing the guitar. It doesn’t matter what kind of player you are, whether you’re into rock and metal, blues, classical or folk, you need a good repertoire of chords at your disposal - the ability to chop and change between them is a vital skill.

Generally focus your attention on two areas: dexterity and speed. Dexterity covers things like learning new chords and giving your fingers a challenge with shapes that might require a stretch or a little more finger strength than you’re used to. Speed is the acid test of whether you can move quickly and smoothly.

But it’s not really about playing fast music. Every chord change you play should be quick and fluent - even in more relaxed styles. Flunk the changes and you’ll hear gaps between your chords. Not good!

Making it easier on your hands

Using your first and second fingers can make the change to G easier because your first finger stays anchored in place. We’d recommend practising both ways.

If you want to see improvements, play through both tab exercises. The second one is a little harder because it forces you to use all four fingers. Aim for seamless changes with no gaps in your guitar’s sound. Once you get the hang of it, you can choose some other chords that challenge you and slowly play them in sequence.

Trying out tough new chords is a great way to improve your changes, so have a go at these shapes. Numbers tell you which finger to use. Black dots are root notes.

Improve your stretch and coordination with this tricky Dmaj7 chord. For a challenge, try moving the shape down the neck to the wider fret spaces.

Press down on three strings with your third finger. It’s a compact finger pattern so make sure not to mute out the fourth string with your second finger.

All fingers and thumbs

This is a tough one! Try to use the tips of your first, second and third fingers, but stay flat with your fourth finger to make it easier to press down both strings.

The numbers next to the notes tell you one way to fret these chords. Also try Em with your second and third fingers and G with second, third and fourth fingers.

3. Use all four fingers

The C7 shape requires you to use all four fretting fingers. For F you’ll need to press down two strings with your first finger - which is known as a ‘barre’.