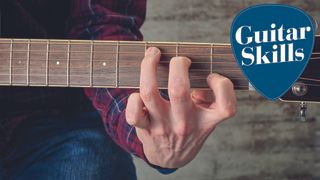 Guitar skills: Get your finger technique sorted and your chords will sing – here's four popular chords and how to play them better.

Most guitarists find the open D chord easy, but hit the open fifth or sixth strings and the sweet sound of the chord will turn to mush. Target the fourth string on downstrokes and lift your pick away from the strings on upstrokes

The open C chord is a repeat offender when it comes to dead strings. Make sure to fret right on the points of your fingertips and don’t pull your fingers flat over the strings.

Chords like G are easy for experienced players, but beginners usually find the stretch is a challenge. The solution? Just play the four treble strings (the thinnest strings) until you get a feel for the stretches. It works with G7, too.

A barre is when you press down on several strings with one finger, and F is usually the first of these chords most players attempt. It’s also one of the hardest. If barring across all six strings is too tough just barre the first and second strings.