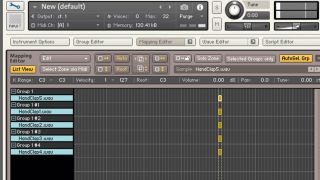 Ever found an astonishingly authentic 'real instrument' sample, or even recorded your own, only to discover that it sounds obviously fake when played repeatedly? You can avoid the dreaded 'machine gun' effect easily by using round-robin sampling.

Round-robin functionality is offered by most samplers and employed by many ROMplers to authentically mimic the sounds of real-life instruments such as drums, guitar and bass. It enables us to assign two or more samples to a single key before playing them back either sequentially or in random order. By capturing several 'takes' of the same sound (snare drum hits, string plucks, etc) then triggering them via round-robin sampling, it's possible to avoid the repetitive, 'inhuman' sound of the same sample being used over and over again.

A great tip when making round-robin patches is to use an odd number of samples relative to the track's time signature; by using five or seven samples in a 4/4 piece, for example, the order of the samples when played in typical musical groupings (eg, groups of four or six) won't cycle in sync with the phrasing of the music, making the end result more natural and less like a musician playing accents. This applies for sequential round-robin playback, but some samplers also offer a random mode, which in theory is more realistic but runs the risk of the same sample playing twice in a row from time to time. Luckily, most samplers offer the option to prevent the same hit sounding successively.

For more on creating organic-sounding mixdowns, grab Computer Music 224 - it's on sale now.

Step 1: Open your DAW, set the tempo to 128bpm, and set up a loop for playback. Now import HandClap1.wav - a single clap - and put it on beats 2 and 4 of every bar. A single clap works OK once or twice, but it sounds unrealistically consistent when used repetitively. We'll create our own living, breathing handclap instrument using the round-robin function in NI's Kontakt.

Step 2: Add a new instrument track and draw in a one-bar MIDI region with C3 notes on beats 2 and 4, then duplicate the region four times and mute the Clap audio channel. Now, load a fresh instance of Kontakt. Click the disk icon (top right) and create a new Instrument before clicking the instrument's spanner icon (top left) to start editing. For realism, though, we need several versions of the same clap.

Step 3: Open the Mapping Editor and import these files - each sample will be given its own zone automatically. Next, activate List View (top left of the Mapping Editor) to make it easier to work with our zones. Set all of the clap zones to the key range C3-C3 with a root note of C3 - this will place all of the zones on the same key, ready to be cycled through later.

Step 4: Select all the zones, right-click and select Move Each Zone To Own Empty Group, then make sure Edit All Groups is activated (top-centre of the instrument). With all our samples now triggered by the same key, we can use Kontakt's Group Editor to trigger them randomly. Open it, click Group Start Options and select Cycle Random - it'll be applied to all zones automatically.

Step 5: Now the five clap zones will be triggered randomly, but you might find that they repeat themselves here and there - we can fix this using a sequential round-robin arrangement. Pull down the Group Start Options and choose Cycle Round Robin from the menu, then disable Edit All Groups (top-centre of the instrument), so that we can edit each individually.

Step 6: We can now set the position of each grouped clap zone by changing the position of each group in the round-robin cycle. Select Group 1 and set it to 1, then set the other four groups to between 2 and 5 - the order in which the samples are triggered is worth experimenting with. We can even play the claps as a close bunch of notes to imitate a group of people clapping together.