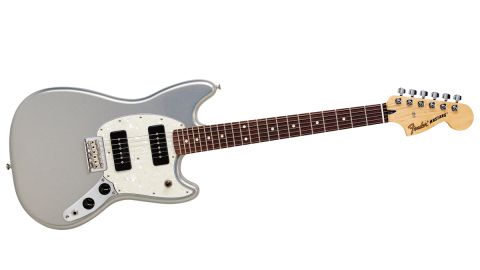 Superb playability at a reasonable price.

While the new Mexico-made, short-scale Fender Offset Series is rounded off with the Mustang Bass PJ (£539) featuring - you guessed it - both Precision and Jazz pickups, the bulk of this new range centres around two Duo-Sonic models and a pair of Mustangs.

For this review, we snagged the soapbar-loaded Mustang 90. We won't be looking at the more familiar Mustang packed with twin single coils, plus maple 'board and finish options in Olive, Olympic White and Black (£485).

Digging deeper, all of our Offset Series guitars are based around the same compact double-cutaway alder carcass. In case you're scratching your head, 'offset' refers to the guitars' body waist, which is, well, offset. That's to say, the body contours are not a mirror image like the waist cutouts on, say, a Les Paul.

Moving on, the spec is eerily similar across the range with each guitar sharing a string-thru body hardtail Strat bridge with a set of vintage-style bent-steel saddles. Flip the guitars over and you'll see six ferrules to anchor the strings.

The Doppelgänger vibe continues with a 610mm (24-inch) bolt-on maple neck with a modern 241mm (9.5-inch) radius fingerboard playing host to 22 medium jumbo frets, a slick satin polyurethane finish and a perfectly cut 'synthetic bone' top nut. There are some differences that are worth pointing out.

Switching between the two recently-reviewed Duo-Sonics and our solitary Mustang, it's obvious that the feel, playability and low action is just about identical throughout. The shared 'modern C' neck profile has a bit of meat on its bones, yet doesn't compromise the user-friendly reputation of the short-scale Fenders.

The chunky frets and 241mm (9.5-inch) fingerboard radius make for a low, buzz and choke-free action.

Obviously, Duo-Sonics and Mustangs have form in grunge, punk and 60s garage rock. In fact, the Duo-Sonic HS with its hardtail format and bridge humbucker is close to the spec of Kurt Cobain's vintage Mustangs. The Nirvana frontman famously chiselled 'buckers into his pawnshop prizes and locked down the vibratos.

The Mustang 90 also packs a pair of fat-sounding P-90 single coils. Used in conjunction with the rosewood fingerboard, the tone exudes more warmth than the Duo-Sonics put out. Okay, it's true that you'd never confuse it in a blindfold test with a Les Paul Junior, but the Mustang reacts beautifully to a bit of old-school overdrive.

We especially enjoy the neck position, which works wonders for sweet Chicago-style blues licks. You can see why Jimi and Rory liked short-scale Fenders - although we can't shake the feeling that soapbars look a bit odd crammed into that little body, the tone speaks for itself.

Scoff all you like at these short-scale 'kids' guitars. You might not get off on the whole Kurt Cobain/grunge back story, but we all like guitars with good pedigree and faultless playability. The build quality is excellent and you're good to go as soon as you take it out of the box.