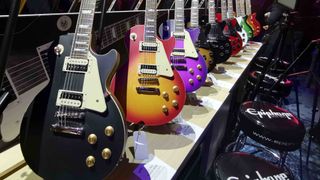 NAMM 2020: There were so many new acoustic guitars turning our heads at the show, we had to have a whole separate list for the signature model highlights.

The themes of the year seemed to be surprise and consolidation; Martin want to innovate again and are doing so, Fender are balancing the old and the new… Epiphone means business with a new line that reflects big brother.

Was it an easy decision for PRS to allow one of its greatest flagship models to enter the more affordable S2 line? After all, it's kind of giving us more for less and could divert McCarty Customers from its Core line. Be that as it may, we applaud the decision to offer this guitar for players and want to recognise it.

The original 594 McCarty model quickly became a best-seller for good reasons. And you get them all here; vintage neck profile, the old school bird inlays, vintage-voiced 58/15 pickups with coil-taps, aluminium tailpiece, zinc bridge with brass saddles and studs. The 24.594" scale length (hence the name) distinguishes this from the 25" S2 models but this is a classic, versatile and Maryland-crafted PRS guitar – for less.

The return of Fender's somewhat obscure late 70s / early 80s Lead model is a surprise, but with all-new features and Player Series price point, it's a very tempting one that could give it a whole new lease of life.

That guitar was designed as a cheaper Strat-like option, but Fender has made its new Lead II and III distinct follow-ups. A modern 'C' Player neck with 9.5" radius brings the new to balance the authentic reissue body shape and logo. The pickups here are Player Strat single-coils But then there's the Lead switching…

While the first is the standard three-way pickup switch, the second switch performs different functions on the II and III. For the II it's a two position switch to access in and out of phase sounds when both single coils are activated in the middle position.

For the double humbucker III, a three-way switch splits the bridge or neck humbucker for single-coil sounds. There's some great potential versatility for your tones here for $599.

Read more: NAMM 2020 VIDEO: Fender's Lead is back from the dead

A surprise saved for Martin's NAMM 2020 press conference at the show, this electro acoustic's bold offset shape is only half the story.

An innovative neck design allows the most access to the the upper frets on an acoustic guitar that we've encountered, opening up new possibilities for players. A neck taper enhances this sense of freedom to explore the full range of the fretboard.

Read more: Is Martin's new SC-13E acoustic its most progressive guitar ever?

The Les Paul line up on the Gibson and Epiphone stand had all bases covered – and for the latter brand the lineup as a whole was a celebration of its history and future. While the Epiphone side of the impressive room (the word 'stand' doesn't really do justice to it) featured guitars like the new ES Uptown Kat model, Gibson's Original line was reflected in the new Epiphone Inspired By Gibson series.

We love the understated finishes here; not so much 'Worn' to our eyes as satin Ebony, Heritage Cherry Sunburst, Purple and Gold Top. Coil-splits on the Alnico Classic Pro humbuckers and Grover tuners make this a strong $449 deal in a 2020 line-up that is full of good news.

Read more: Epiphone has launched a US-built Texan and revamped its range into Originals and Inspired By Gibson lines

We love the LTD Viper models and we also love the EverTune bridge that the company has been so proactive incorporating on select models. So naturally we're going to love this.

If you're unfamiliar with EverTune's bridge design (also available from $275 for the company to retrofit on your existing guitar), its ltension bridges use a spring and a lever for each string to keep them in tune. And it works remarkably well to provide stability on stage and in the studio. But the deal gets even sweeter with this guitar…

The Seymour Duncan Sentient (neck) and Pegasus (bridge) humbuckers are a superb pairing in their own right but are splittable here by a push-pull control for a whole range of tones.

Ever wondered what it would be like to try new pickups but didn't want the soldering hassle? OK, the Swiss company followed in Dan Armstrong's wake to some degree with the concept of the Pickup Swapping System on the original Relish Mary guitar. But the Trinity brings the technology within a much more accessible price and on Relish's first solidbody model.

Players only need to pull the pickup out of the back of the body with two fingers and replace it with another humbuckers P-90s or single-coils without a soldering iron in sight. It works incredibly fast too, and we were impressed with the sense of quality throughout on this forward-thinking looking guitar.

The guitar is manufactured in partnership with Cort, a company with its own high reputation. The $1,699 Trinity is available in red, blue or black metallic finishes and on the pickup front, Seymour Duncan and Bare Knuckle already have compatible pickups for sale on the Relish website.

If you've lusted after one of Fano's boutique models but felt priced out before, its new Omis series is for you. But with the company's three popular designs represented in the launch lineup, alongside the return of the Mustang-esque MG6, all at at $999 each, it's going to appeal to more people than that.

Naturally our offset-admiring eyes made a beeline for the JM-6 model; and with the same custom Fano pickups as their Standard series counterparts, it will sound as good as it looks.

Read more: Fano announces its most affordable guitars yet with Omnis Series

Super-strat-style guitars are all very well but if you're a Tele addict, you are left a little empty handed away from Fender. So its sister company Charvel is here to give you added GAS because its new $899 / $999 Pro Mod guitars are ticking the boxes for us.

That's a genuine licenced Tele headstock – with a reverse spin giving it a distinct vibe. Available in alder body satin hardtail ($899) or ash body trem ($999) black and white editions, the 24-fret models are testament that few are offering as much high spec for the price as Charvel right now.

Fishman Fluence Open Core PRF-COC pickups with three distinct voices, graphite reinforced neck, heel-mount truss rod thumb wheel, hand-rubbed urethane finish on the back of a speed neck, Luminlay side dot markers… brass saddles in the bridge. This is a serious guitar all round.

Yes, ok it seems absurd praising Gibson for simply bringing back a model in a black finish to its Original Series that they've known how to make since 1954. But look at it!

Even with the likes of Eastman's new SB55/v-SB biting at its single-pickup heals we gazed at Gibson's originator, for quite a while… drool gathering at our feet in an unsightly puddle. Because the Junior takes it all down to the core, and we love it for that. And now back in Ebony with a tortoiseshell plate? Irresistible!

The ingredients are simple; single dogear P-90, 50s-style neck, wraparound bridge single cut slab mahogany body and a proven track record for rock. It really doesn't have to be complicated… providing you can raise $1,499.

We always back a beeline for the Gretsch stand at NAMM – and we always know it will deliver at least a few affordable models that look the business. We already know the quality the Streamliner series has delivered in the last few years, so we were delighted to see a new model added to the line.

This Junior Jet features a laurel 12" fingerboard with 22 medium jumbo frets for a balance of contemporary with the vintage look. We're especially liking the Imperial Stain finish.

We saw pastels, neons, swirls, sandblasts and some incredible poplar burl finishes at this year's show but we can't help but feel the good 'ol black finish still has a lot going for it in the stylish, simple, goes-with-anything stakes. Especially when its delivered like this – coming on like an AZ take on the Gilmour Black Strat.

The AZ line celebrated its first birthday with a brace of new models – and two of them were black. We know these high spec guitars are very good indeed, but this black with white detailing might find them reaching out to players previously put off by the showier AZ finishes.