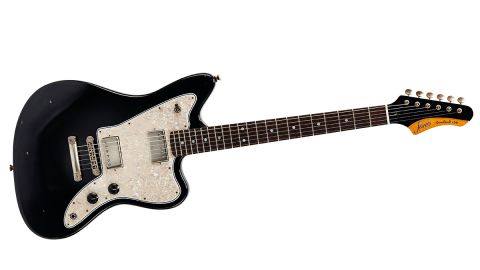 Indie, punk, blues, metal - it's tough to think of a genre where the JM6 couldn't hold its own.

Those familiar with Fano Guitars and its Alt de Facto range will know that founder Dennis Fano took his inspiration from vintage classics while offering contemporary playability and feel.

Although Dennis is no longer with Fano Guitars, you can still spec Fano-designed Alt de Facto guitars in various body styles and finishes and with your preferred level of distressing. But his stuff ain't cheap with a base price of £2,299.

Launched earlier this year, however, were a pair of keenly priced off-the-peg Fano Standard Series models. Concept-wise, the Standard JM6 is much more straightforward than its single-cut sibling, the recently-reviewed SP6.

The offset alder body and bolt-on maple neck combo is classic Jazzmaster/Jaguar, albeit with the old-school Marmite bridge and vibrato dispensed with. Instead, you get a Tone Pros tune-o-matic bridge and stud tailpiece setup.

You'll also find a pair of house humbuckers and a simple volume, tone and three-way pickup selector toggle layout. Just so you know, those of you who live or die by your fat single-coil sounds can order your JM6 with a couple of Fano P-90 pickups at no extra cost. Like its brother, the JM6 comes in a fat, well-padded gigbag, and there are currently no left-handed Standards planned.

In addition to its lightly relic'd nitrocellulose finish, this guitar features a rosewood 'board occupied by 22 medium Jescar 6105 frets.

Plugging in, you notice how much spank it coaxes from its fat strings. Put that down to its Fender scale length and a set of 0.010s.

The humbuckers are voiced for tone not brutality and the bridge unit serves up a generous helping of jangle on a clean setting. Begin easing up the overdrive and we find clarity and note definition are maintained.

There's way more punch and bottom-end on tap here compared with a vibrato spec'd original Jazzmaster, simply because there's more wood. Running through the pickup selections offers a range of vintage and modern tones. The closest comparison would be the classic Seymour Duncan JB and Jazz combo. In other words, ultra versatile.

The 'modified Jazzmaster as a rock beast' thing isn't a new idea. Fender pursued the notion with its humbucker-fuelled hardtail and now-discontinued Blacktop model, while the current Jim Root Jazzmaster proves the concept still has legs.