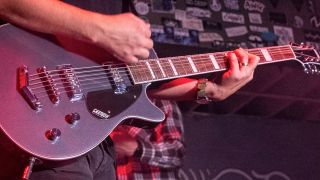 NAMM 2020:Gretsch has announced a mammoth product launch that sees the extensive updates to its Electromatic and Streamliner Series, and introduces all-new styles that build on the brand's heritage.

That heritage was founded on the rock 'n' roll vibe that is sustained across the Gretsch stable, and this year's new models stay true to that ethos while offering something new for the contemporary player, with super-cool electric guitars for players of all budgets, and a very cool Roots Series Jim Dandy acoustic that's compact, affordable, and looks like it has teleported its way to Anaheim, CA, from the 1940s.

But maybe it's best to go straight to the Limited Edition Penguin. There's no UK RRP for this but in the States it should set you back $2,999.99 (and will probably command a similar figure in sterling or euro), and will reward you with a breath-taking Two-Tone Smoke Gray/Metallic Violet finish. The build is chambered mahogany with an arched maple top. It is fitted with two TV Jones TV Classic pickups – think late-1950s Filter’Tron growl.

Other details include a a set maple neck with a 12” radius ebony fingerboard, 22 medium jumbo frets for a more contemporary feel, a Bigsby B3C tailpiece, arched rocking bar bridge with pinned ebony base, Grover Imperial tuning machines and a bone nut.

Gretsch have made some player-friendly improvements to the Players Edition Jet FT, with a new rolled cutaway and tapered heel allowing better access to the top end of the fretboard. The Jet FT models have chambered mahogany bodies with maple tops, set mahogany necks with a standard U profile. The 1.85" body depth and chambering promises "a tighter, more controlled attack."

Elsewhere, there is a pair of High Sensitive Filter’Tron pickups in neck and bridge, while the electronics feature a no-load master tone pot and Squeezebox paper-in-oil capacitor, and a treble bleed circuit on the master volume. Other premium appointments include a set of locking Gotoh tuners, a Bigsby and anchored Adjusto-Matic bridge, and a GraphTech Tusq XL nut. The price is £2,049 ($2,399.99, €2,339).

The G6659T Players Edition Broadkaster Jr. Center Block models share the Player Series Jets' hardware and electronics. Here, Gretsch have gone for Full'Tron pickups. One of the big selling points of the Jr. Center Block bodyshape is that, measuring 14" across its lower bout, there is less guitar to wrap your arm around.

Not everything Gretsch is electric as this year's lineup reminds us. And the G9500 Jim Dandy 24" scale flat-top is going to be hard to beat for value and retro styling.

Finished in 2-Color Sunburst, the Dandy is a parlor-style acoustic from the Gretsch Roots Series and features a basswood top, back and sides. It has a C-profile nato neck, with X-bracing and a top-loaded walnut bridge.

The new 2020 Streamliner models all feature Broad'Tron BT-2S pickups, laurel fingerboards and medium jumbo frets. The G2210 Junior Jet Club is an all-new model for the series. It is a workhorse singlecut with a solid nato body, bolt-on nato U-profile neck, and a neat looking, anchored, compensated wraparound bridge.

Its laurel 12" fingerboard with 22 medium jumbo frets should give it something of a contemporary feel that's at odds with its otherwise vintage styling. The Junior Jet Club is priced £305 ($299.99, €350)

The G2420 Streamliner Hollow Body, with its Chromatic II tailpiece, is constructed from laminated maple, and features enlarged f-holes for improved acoustic projection. It is priced £470 ($449.99, €529) and for an extra 100 bucks you can get the Bigsby-equipped G2420T.

The 2020 Electromatic Series sees a lot of laurel fingerboards, medium jumbo frets, fingerboards with a 12" radius, and treble bleed circuits are a nice touch at this price.

This year sees the debut of the G5410T "Rat Rod" Hollow Body Singlecut – a mean-looking riff on the classic hollow-bodied Gretsch template. These come fitted with a Bigsby-Licensed B60 Vibrato, and feature oversized bound f-holes and the smaller old-school bound headstocks. The Black Top Filter’Tron humbuckers have red pickup inserts, and it breaks ranks with the laurel to go for a rosewood fingerboard.

Next up is another new model: the Jet Baritone. Available with a V-stoptail or a Bigsby vibrato, the Jet Baritone has a 29.75" scale and a solid mahogany body with a bolt-on thin U-profile maple neck. Its mini-humbuckers are voiced for the low-end definition. These offer exceptional value at £569 ($549.99, €639). The Bigsby option is an extra 100 bucks or so.

The G5222 Double Jet meanwhile is a neat-looking doublecut with a chambered mahogany body and maple top. It has a pair of Black Top Broad’Tron pickups and priced £495, ( $499.99, €559) the Double Jet is another great value option.

Last but by no means least, we've got the G5655T Electromatic Center Block Jr. Single-Cut. Again, measuring 13.5" across the lower bout, it is a hugely accessible guitar. It has a laminated maple build, with a maple set neck. The Black Top Broad’Tron pickups should give this one plenty of teeth, with the Bigsby on-hand for those wobbles. Price £809 ($$799.99, €919).

Check out our NAMM hub for all the latest gear news from Anaheim.