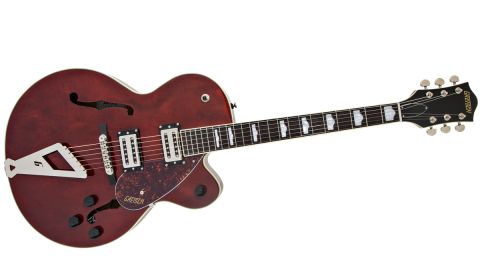 Somehow, Gretsch has made the already incredible Streamliners even better.

Here was a line of hollowbody guitars that not only possessed the look and feel of the company’s higher-priced offerings, but also offered no signifier of their affordable pedigree. The series’ 2019 relaunch builds on that success with a number of tweaks, namely new finishes, a switch from rosewood to laurel for the fingerboard, and the addition of all-new Broad’Tron BT-2S humbuckers. In for review is the G2420, the range’s fully hollow body with a gorgeous Chromatic II stairstep-esque tailpiece (a Bigsby option is also available for £485).

We were impressed by the Streamliners’ classy looks three years ago, and our opinion hasn’t changed - we love the new tortoiseshell scratchplate, hump block inlays and Grover-alike tuners.

The cynics among you may deduce that this relaunch is simply to dodge CITES restrictions, but the laurel ’board is somewhere between rosewood and ebony in feel, which should quiet anyone still donning rosewood-tinted glasses. Meanwhile, that thin U-shaped neck is comfortable while providing enough meat to match the guitar’s hollowbody heft; there’s a satisfying resonance to the unplugged performance, which bodes well for jacking in.

These new humbuckers are higher output than your granddaddio’s Gretsch, but the G2420 still makes a killer jazz guitar with the neck pickup height set low, ideal for the snappy attack of George Benson-style leads, while it lends itself nicely to fingerstyle, too. Adding some gain makes the bridge ’bucker a great choice for anthemic Dave Grohl-style extended chords.

These aren’t your contemporary high-def humbuckers, though; we’re talking raunchy old-school here. Think Malcolm Young crunch wound back, Chris Cornell with the wick up. Compared with the original Streamliner Broad’Trons, we noted a slight increase in high-end clarity, which helps notes ring out in jangly chords on the cleaner end of the spectrum.

The addition of the impressively lively, dynamic Broad’Tron BT-2S pickups only enhances the Streamliner formula. As a result, the G2420 makes a great workhorse for blues, jazz and rockabilly players.