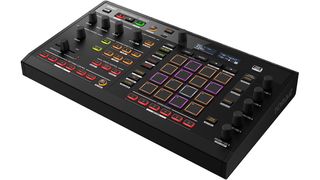 MIDI Pad controllers are no longer consigned to the bottom of the controller pile, behind the likes of the MIDI keyboard or even bespoke DAW controller. They now share equal billing in the studio and on stage.

They are an essential part of many a modern producer’s arsenal, with some even placing one at the centre of their setup, replacing the keyboard. Some - notably Native Instruments' Maschine products - come with their own companion software, while others - Ableton's Live-friendly Push 2, for example - are designed specifically for controlling a certain DAW.

No longer used simply for tapping out beats, or triggering clips and samples, today’s best pad controllers are practically instruments in their own right, enabling you to compose and record melodies, chords and basslines. Some also contain powerful sequencers, which can be used to trigger both your music software and other hardware.

Obviously, all of this is great news, especially if you’re not so comfortable when it comes to playing the keys, but which of the many MIDI pad controllers on sale today is right for you?

We’ve corralled the best of the current controllers so that you can see what’s available right now. No matter what your budget, there’s a MIDI pad controller out there with your name on it, so let's help you find it.

It’s not really accurate to call Maschine a pad controller; it ships with its own companion software, so is pretty much an instrument in itself. The workflow follows the classic MPC blueprint, and gives you a pad-based way of composing, arranging, mixing and performing. The new Mk3 model brings Maschine Studio’s flagship feature – its fabulous screens - to the mainstream model, taking a couple of cues from Maschine Jam, and updating the hardware in general terms. NI has taken the obvious step of building an audio interface into Maschine; a simple 2-in/4-out setup capable of recording and playback at up to 24-bit/96kHz quality.

BeatStep Pro features three independent step sequencers and a set of general purpose MIDI controllers. Two of the sequencers are monophonic, intended for riffs, basslines and the like, while the third is for sequencing up to 16 channels of drums. All three are programmed with 16 velocity-sensitive pads (with aftertouch), 16 step buttons and 16 rotary knobs. Perhaps the most obvious targets for BeatStep Pro's sequencers are hardware synths and samplers, but we had just as much fun controlling standalone music apps on our laptop. The same goes for plugins in a DAW, of course, and we can imagine many studio producers using it to create sequences on the fly that are subsequently recorded into their DAW for further editing. It can also send and receive MIDI clock, and so can act as either master or slave with almost anything.

As well as developing Live, the all-conquering production and performance DAW, Ableton also sells its own pad controller: Push 2. This 64-pad grid is used to play and record melodic MIDI clips and Drum Rack beats, either 'live' or through an ingenious step sequencing system. Push 2 also facilitates browsing for devices, presets and sounds, which can be loaded onto tracks in Live, and controlled and automated using the eight rotary encoders, and even offers basic mixing operation. In summary, Push 2 is quite simply the most powerful, wildly creative Ableton Live controller on the market, and a worthy purchase for those who use said software.

Having announced its arrival with the keyboard-style Seaboard controllers, ROLI moved into more affordable territory with its iOS-centric Blocks range. The centrepiece of this is the Lightpad Block M, a rectangular, rubber-topped control surface incorporating MPE technology so it can be played using a variety of expressive gestures. It's a slightly different animal to the rest of the controllers on this list, but now that it's compatible with a wider range of software, it's an intriguing option.

While the previous MPD32 looked utilitarian, the MPD232 looks much more inviting. The larger, flatter case is made from smooth black and red plastic and surrounding the screen (which is mainly used for assigning MIDI data/CCs to the 72 assignable controls), the case morphs into shiny black perspex (unfortunately the same fingerprint and scratch-inviting type found on the recent Advance controllers and on Roland's JD-XA synth). In keeping with recent trends, there's a decent 32 step x 64 track sequencer onboard which adds a welcome new dimension to the MPD range (it can be MIDI-synchronised and used to control software instruments and/or external MIDI instruments).

The Launchpad Pro isn't the be all and end all of Live controllers, but what it does, it does very well. It's not suited to precise mixing but it's intuitive and inspiring for creative purposes - allowing users to fluidly compose without being drawn away in order to jump between views or devices. It's brilliantly suited to live performance too, and we can see it becoming a centrepiece to a lot of musicians' stage set-ups. It's not as powerful as Push, but being more portable and cheaper it doesn't need to be. Its standalone MIDI capabilities give it a distinct edge, too. In all, for the price, the Pro is one of the best controllers on the market.

If you're in the market for a durable and attractive pad controller that's highly customisable and can integrate with most if not all of your music software, the Base II is a fantastic solution. Situated above the pad matrix is an array of nine touch-sensitive fader strips and eight capacitive touch buttons, with a set of eight illuminated silicone push-buttons down the right-hand edge. As with the original Base, all of these controls are freely assignable. The thick, soft pads are highly responsive and default to step through a series of colours when played, depending on how hard you hit or press down on them. With its robust construction, versatility and open-endedness, Base II is a fine pad controller option.

The iRig Pads is an MPC-style pad controller aimed at iPad/iPhone/iPod touch musicians, but also fully compatible with Mac, PC and Android. It comprises 16 two-colour backlit pads (red and green, but mixable to orange, too), two knobs, a fader, two buttons and a push-button rotary encoder, all of which can be assigned to output a range of MIDI data. The iRig Pad scores well in terms of playability, is pretty easy to program and sits comfortably alongside its acclaimed iRig stablemates. iOS musicians, in particular, should keep it in mind.

Best for sequencing and track-building within Maschine

Maschine Jam provides a completely new way of interfacing with the Maschine software, which remains largely unchanged; one that neither supersedes nor replaces the original hardware, yet provides a very different user experience. It ditches the 16-pad format in favour of a grip of 64 smaller pads, which are backlit. Its other major addition is a bank of eight touchstrip faders that, broadly speaking, replace the eight Macro knobs of the original Maschine. It also does away with the built-in screens, the functionality of which is replaced by a number of pop-up windows that appear on the computer screen in response to button presses on the hardware. The main consequence of these changes is to move away from the sampler-style workflow of the original hardware towards one focused on 'performance' parameters, along with considerably deeper sequencing and arrangement capabilities.

QuNeo is an LED-rich (251, actually) MIDI controller with 27 touch-based controls including pads, sliders, and rotary 'knobs'. It’s billed as a 3D multitouch pad controller; the point of difference is that the pads are sensitive to note-on, velocity, pressure and 'location' - the XY position of your finger on the pad. Not everyone will fall in love with the QuNeo, but its feel and functionality are undeniably different to most of its rivals. Get your hands on it and see what you think.

NI’s most affordable Maschine ever

Last year’s Maschine Mk3, with its added interface and improved screens, did an impressive job of drawing user focus away from the computer, making it easier to select, edit and play sounds without referencing plugin UI. By drastically downsizing the hardware screen, this Maschine Mikro update actually pushes things in the opposite direction; minimising the amount of visual information that’s provided by the controller in favour of more space for hands-on control. While increased reliance on a computer screen might seem counter-intuitive, it actually does make a lot of sense.

A creative standalone sequencer that can handle all your gear

Check Plugin Boutique
Check Andertons
Check Thomann
See all prices (4 found)
Responsive, playable pads
Lots of knobs make the Squid very good for live use
Many unique paths make it easy to break out of the step-sequencing box
A bit pricey given that it has no audio component
No Pro-DJ sync with Pioneer DJ’s CDJ units
Groove Bend slider could be a bit more multi-purpose

SQUID (derived from SeQUencer Inspirational Device) is a standalone 16-track polyphonic step sequencer, capable of outputting MIDI, CV, clock triggers and DIN sync. Its interface is focused around a grid of 16 backlit pads that can be played live or used to input sequencer steps. Each of the 16 tracks can be programmed with up to 64 patterns, each with a maximum of 64 steps. One of the great advantages of the Squid is how each track can be set up individually to sequence the output channel and device of your choice. In fact, there's a lot to love about it in general, particularly if you're already the kind of producer who likes to work with a lot of separate machines for sound generation. It opens the door to a world of bespoke sequencing options, with new features like Groove Bend and speed modulation putting a new spin on your step sequencing moves.