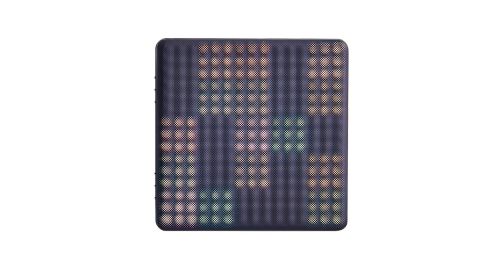 Thanks to refined hardware and vastly improved software implementation, the Lightpad is now a desirable, expressive controller.

Roli’s Blocks range got off to a shaky start.

When we reviewed the entry-level multidimensional polyphonic expression (MPE) controllers earlier this year, we found the concept promising but the execution poor. At the time the ecosystem suffered from being bound to Noise, a severely limited iOS app that provided some solid sounds but little in the way of serious music-making functionality.

Now Roli has released Lightpad Block M, the second version of Blocks’ control pad. The M, like its predecessor, is a roughly 4-inch square rubberised surface used to send MIDI messages to a desktop or mobile device via Bluetooth. It also has a USB connection, used for charging or hooking up to non-Bluetooth computers.

Magnetic connectors along each side allow it to connect to other Blocks, such as the Seaboard Block keyboard or Noise-focused Live and Loop Blocks.

The main update the M boasts is an enhanced playing surface. The original Lightpad featured a flat and fairly firm surface, but the M has a ridged and far softer playing interface, based on the wave-like surfaces on the Seaboard controllers. Under this softer surface lie 225 ‘microkeywave’ sensors, making the M more sensitive to movement and pressure across its five ‘dimensions’ of expression (Strike, Slide, Glide, Press and Lift).

While the original Lightpad was by no means a bad control surface, the M’s softer silicon definitely feels more responsive, and makes it far easier to apply subtle changes in pressure. The back lighting is brighter too, making the Lightpad more visually striking.

More than the hardware, however, it’s changes to the software that has improved the Blocks experience. Problems with the Noise mobile app persist. It has plenty of quality sounds but, despite a few enhancements since our last review, it remains fairly under-equipped on the functionality front.

However, Noise is no longer the be-all and end-all when it comes to creative uses for the Lightpad.

Within the mobile realm, Noise can now be used as an AU within GarageBand for iOS, functioning as a plugin sound engine. It can also export recorded loops as Ableton Live projects. On the desktop front, each Block now comes with a variety of software tools, foremost of which are ‘player’ versions of Roli’s Equator and FXpansion Strobe 2.

While these are cut-down versions of full plugins, both offer a healthy selection of MPE-ready sounds with simple parameter editing and FX control, and there’s more than enough plug-and-play, MPE-ready content to make the Lightpad a justifiable purchase. Both can be updated to full versions for the reasonable price of £49 each.

There’s Blocks Dashboard too, which allows the MIDI output of the controller to be customised and configured to work with third-party devices. Add to that a full DAW included in the box, in the form of Tracktion Waveform, along with a Lite version of Ableton Live, and the Blocks package is a far more rounded proposition than before.

The Lightpad M now feels like a well-thought-out entry point into the world of multidimensional controllers. There are still weak points to Blocks as a whole - mostly Noise, and we’re not convinced the Live and Loops Blocks are worth bothering with - but with a better interface and solid software included, the Lightpad now feels like a desirable purchase.