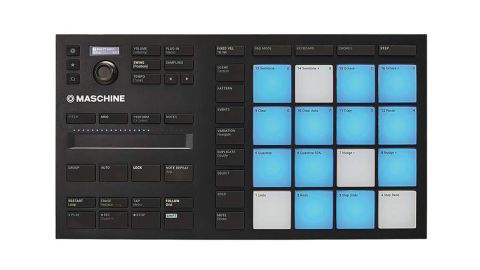 Lacks the expressiveness of the full-sized Maschine, but as a fast, fun tool for getting beats down, it’s hard to argue at this price.

Last year’s Maschine Mk3, with its added interface and improved screens, did an impressive job of drawing user focus away from the computer, making it easier to select, edit and play sounds without referencing plugin UI.

By drastically downsizing the hardware screen, this Maschine Mikro update actually pushes things in the opposite direction; minimising the amount of visual information that’s provided by the controller in favour of more space for hands-on control.

While increased reliance on a computer screen might seem counter-intuitive, it actually does make a lot of sense. While previous Mikros did offer more in the way of browser and navigation feedback, their halfway-house screens were never really sufficient to draw emphasis away from the more in-depth experience offered by the main plugin interface. By accepting that you’re more than likely going to turn to the computer for deeper browsing and editing duties, it allows the controller to focus purely on the duties it’s best at - playing sounds and creating patterns.

That being said, the small screen found on the Mikro Mk3 does a fine job of displaying essential information when it’s needed - tempo, swing and basic parameter settings are displayed, but navigation is a bit cumbersome when compared to its bigger sibling. It’s fine for browsing sounds too, if you find that you’re happy to make use of the ‘star’ system and mostly work from a prepared list of favourite presets.

The rest of the design borrows heavily from its larger sibling - no bad thing. The revamped pads look and feel great, and the adjusted setup of navigational buttons makes sequencing and arranging far more streamlined. The Mikro gains its counterpart’s Smart Strip too, which once again can be used for performance effects and manipulating sounds. It’s a particularly great addition here, bringing an element of expressiveness to the controller which makes up for the lack of parameter/macro rotaries. The same goes for the Variation Engine and Lock Mode.

As with previous iterations, that lack of hands-on parameter or macro control is the Mikro’s weak spot. To be fair, this is more of a design choice than an omission; the Mikro is aimed at those who value simple MPC-style finger-drumming more than complex sound design and parameter automation. For a fast, hands-on tool for sketching beats and grooves, the Mikro remains hard to beat.

At less than £200, it’s NI’s cheapest Maschine product to date too, though it’s worth noting that the included Factory Library is considerably smaller than that included with other Maschine products (or, for that matter, previous iterations of the Mikro). That being said, the included sounds remain high quality, and with full versions of Massive, Monark and Prism thrown in, it’s still hard to argue with the value.