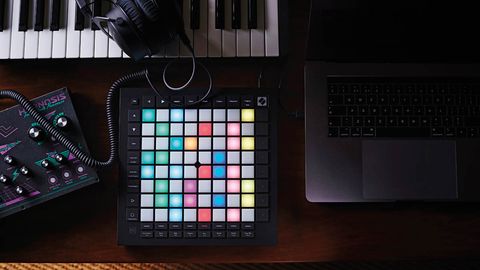 Bridging the gap between hardware sequencer and DAW controller, this is one of the best pad devices on the market.

One of the less surprising announcements of January’s NAMM show, this new version of Novation’s top-end Live controller follows hot on the heals of updates to the rest of the company’s Launch range.

Despite being labelled Mk3, this is actually only the second generation of the Pro; Novation explain that the name signifies the controller’s place within the overall ‘Mk3’ generation – logic which sort-of makes sense if you squint a bit.

The main thing this latest Launchpad Pro shares with other updates in the range is a sleek, redesigned build. That brings a subtly refined visual aesthetic and a new lower profile that makes this controller feel more slight and lightweight than its predecessor.

The controller also boasts larger, revamped pads that are, as with the previous version, velocity sensitive and they also feature customisable RGB backlighting.

The core principles of the Launchpad Pro are the same as other devices in the range: this is a controller primarily aimed at use with Ableton Live, built around an 8x8 pad grid.

That grid was originally designed with Live’s clip-launching capabilities in mind – and that remains a central element of the Launchpad workflow – but as time has gone on, Novation have developed ways for it to be used with Live’s instruments, Drum Racks, mixer and more.

When the original Pro was released, the main thing that set it apart from other Launchpads was the inclusion of velocity sensitivity. While that’s now trickled down to be added to the Launchpad X too – although polyphonic aftertouch does set these pads ahead of others in the range – the Pro still offers a considerably deeper level of Live control than some of its counterparts.

Novation boast that the Pro’s pads are the largest and most responsive to date.

A randomising Mutation mode is one of several smart creative controls.

The pad grid can make use of five modes, the first of which is the Live-specific Session mode. As its name suggests, this is used to interact with Live’s Session view, used for launching, recording and arranging clips and scenes.

This works pretty much as it does on other Launch controllers, whereby individual pads are used to trigger clips and the buttons to the side, above and below allow for triggering of full scenes and navigation around the interface. Where the Pro goes deeper is in its supplementary controls, which allow for control of Live’s transport section, record arming, mute, solo, Capture MIDI and quantisation.

The controller also allows for access to a number of mixer functions, making use of ‘virtual faders’ laid out across the pad grid. These can be used to take control of volume, pan and send levels. There’s also a Device mode that, when engaged, lets the eight pad columns control a bank of eight macro controls.

• Ableton Push 2
Ableton’s own controller is still the one to beat when it comes to Live control. Its screen makes navigation easier, but there’s no MIDI out or direct hardware interaction.

• Novation Launchpad X
Like the sound of a Launchpad but don’t need the sequencer or standalone features? Check out the cheaper Launchpad X.

While these parameters are all DAW-specific, what sets the Launchpad Pro apart is that its remaining four modes can all be used universally – either in Live, with third party software, or even independently from a computer altogether via a pair of MIDI outputs on the hardware.

These remaining modes are labelled Note, Chord, Custom [see Customise It!] and Sequencer. Note is Novation’s Scale mode, which is also found on the other Launchpads. Anybody who has used a modern pad controller will know the drill here; the pads are used as a keyboard, which can be mapped to a preset selection of scales with an adjustable root note.

It’s a pretty standard feature, but Novation’s take is well-implemented with a flexible Overlap option for dictating the relative position of notes on the pad grid. When used with one of Ableton’s Drum Racks, Note mode can be used for triggering percussion parts in 4x4 grids too.

Chord mode is fairly self-explanatory, allowing users to trigger a variety of chord shapes using a single pad. Again though, the implementation is impressive here, with a neatly-designed layout that makes it easy to construct, save and play back chord shapes.

The Sequencer is the Launchpad Pro’s real trump card, with four independent polyphonic sequencing tracks that can be routed to software or hardware of your choice. The sequencer grid itself looks remarkably similar to that found on Ableton’s own Push 2, whereby the top rows of the grid act as a 32-step sequencer and the 16 pads in the bottom left become a drum pad or scale mode.

There’s an impressive amount of depth to the Launchpad’s version though, with control over individual step velocity, gate length and probability-based and randomised notes. Each sequencer track can store up to eight patterns too, and you can chain and cue-up patterns into longer sequences.

Novation have been refining these kinds of pad-based sequencers since the release of the original Circuit; at this point their designs are some of the best in the business, and the Launchpad Pro might be the best pad sequencer we’ve seen yet.

What’s more, the ability to use the sequencer independently of a DAW or computer gives the Launchpad Pro a very clear USP, meaning it no longer exists so much in the shadow of Push 2. In fact, there’s enough here to make a very solid case for buying the Pro even if you never intend to use it with Ableton Live.

The flip side is that there is now a lot of functionality crammed into a device without a screen. On the whole, Novation have made the Pro easy to navigate, but there’s a lot to memorise, particularly when setting up scales and chords. It’s not unworkable, but compared to, say, Push 2 or Maschine, you’ll be more likely to need a manual nearby.

MusicRadar Verdict: Bridging the gap between hardware sequencer and DAW controller, this is one of the best pad devices on the market.

"The light and velocity-sensitive pads are wonderful to play, and are more like those of Ableton’s Push 2 than, let’s say, the less reactive Akai MPC... If you’re on a budget (the street price will be lower than that stated above), this is a good option, especially as it includes a copy of Ableton Live 10 Intro."
MusicTech