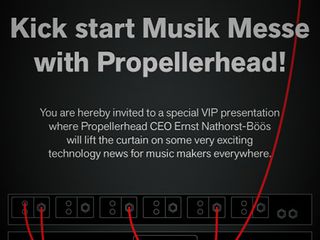 What's this all about then?

The Musikmesse 2012 rumour season officially starts here. Propellerhead Software has announced that it'll be making a pre-show VIP presentation on 20 March (the say before Musikmesse starts), at which its CEO Ernst Nathorst-Böös "will lift the curtain on some very exciting technology news for music makers everywhere".

Are we to draw anything from the fact that this invitation has been extended the day after Apple launched its new iPad. An iPad version of Reason (or something similar) is many musicians' dream app, and Nathorst-Böös is on record as saying that "the [first generation] iPad is at least as powerful a computer as the ones we started making software for back in the '90s. And that's pretty exciting!"

Another potential clue is that the invitation features an outline of the back of a Reason-style rack, with patch cords in place.

If software isn't to be on the agenda, then perhaps a dedicated Propellerhead Reason hardware controller could be in the offing? We know that the company has been recruiting hardware developers, and this would be a natural progression following the launch of Balance, the company's Reason-friendly audio interface.

Whatever happens, you can rest assured that MusicRadar will be on hand to tell you all about it.

Keep checking MusicRadar.com's Musikmesse 2012 hub for all the show highlights.