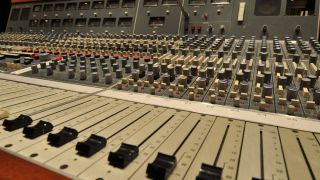 Remember when mixing was an art form? (Image credit: Future/REX/Shutterstock)

We live in a golden age of audio production. Things that were once the sole domain of the commercial recording facility are now easily - even freely - obtained. A vast well-spring of knowledge is readily available to anyone who bothers to look for it, and is often personally dispensed by well-known practitioners of the craft. Most astonishingly, we can now create, record, mix, and master entirely professional productions without ever leaving the comfort of our homes, all thanks to the humble DAWs that reside within our desktop computers, tablets and even - gasp - our phones.

To us old-timers, this was once the stuff of science fiction. We dreamed of such a future, but were never truly convinced it would arrive in our lifetimes. Yet here it is, and we stand in gracious awe of the multitudinous musical miracles within our immediate grasp.

And yet, looking back, we can't help but feel a wistful sense of loss. At the risk of curmudgeonry - and with tongue edging into close proximity to cheek - we've compiled a brief and incomplete list of minor sacrifices that have been made along the way to the artistic freedoms we enjoy today. Maybe you've been around long enough to have a few potential entries of your own, and we encourage you to join in the discussion.

And when we're done complaining about how easy these modern kids have it with their highfalutin' contraptions, we'll head off to the pensioned producers' home and leave 'em to get on with making the noisy racket they call music! Bah!

1. Everything was cutting edge

Today's musicians and engineers seem utterly obsessed with the past. The DAW and its capability to host plugins has spawned in its users a voracious appetite for inexpensive virtual recreations of classic gear purporting (and often failing) to sound like the real thing.

The thing is, though, that much of that old gear was meant to be cutting edge at the time of its release, and designed to offer something new. The musicians and engineers of yore were always looking for the next big thing, and were presented with a steady stream of exciting products that promised to deliver exactly that. Most failed, but dammit, it sure was exciting to try 'em out!

2. Playing a song all the way through

Modern DAWs offer so much power and flexibility when it comes to arranging and rearranging that they can potentially foster laziness and complacency. Why sing the chorus three or four times when you can just cut 'n' paste the first one across the whole song? In fact, why bother getting it right even once when you can simply call up Melodyne and knock the bothersome thing into pitch and time?

So many shortcuts to perfection are, in fact, the fast track to sterile, lifeless music. If we can't be bothered to actually perform the chorus three times, why should the listener be bothered to listen past the second verse?

Even as we write this, another mom n' pop music equipment store in our hometown has announced its imminent closure. Granted, it carried only the merest selection of gear, but if you needed a cable, drum stick, or guitar string in a hurry, you could pop in and grab one without having to wait for the big brown delivery truck to trundle up to your door.

Yes, online merchants offer a vast selection and competitive pricing the likes of which we couldn't imagine a couple of decades ago, but there's a lot to be said for the local music store. Without one, there is no opportunity to actually try out a physical instrument or controller to see if it truly suits one's needs.

And nothing beats the music store as a place to hang out and shoot the breeze with other musicians - today's anonymous alternatives are simply too impersonal.

What the hell has happened to MIDI timing? Some of our first computer-based compositions were created on an Atari 1040ST running C-Lab's Creator (which would evolve into Logic over the following three decades). We had a Casio CZ-101, a Roland Alpha Juno, a Yamaha RX7 drum machine and QX21 sequencer. And let us tell you: MIDI sync on that rig was tight.

So why is it that, 30 years on, producers are forced to jump through hoops to achieve a jitter-free MIDI signal? Sure, you can employ third-party solutions like Innerclock's System's Sync Gen II Pro, but why should you have to do so? A lot of research and development goes into creating recording software and interfaces with ultra-accurate clock signals, so why shouldn't we expect the same precision from MIDI?

One of the most significant differences between desktop production and tracks recorded in the pre-DAW studio is that we can now see the music.

In the past, the only indicator of time was the ticking tape counter and the music itself. Musicians (or machines) dictated the tempo, and if you wanted to know where the stab at bar 41 was, you had to count and - heaven forfend - listen. Music was not depicted as multi-coloured chunks, and we certainly couldn't see our waveforms splayed out across a screen.

As handy as such visualization can be, it also allows us to mix and even compose with our eyes instead of our ears, always able to see what's coming rather than experience it as the end listener would. This can facilitate obsessive nit-pickery and over-working that has absolutely nothing to do with how a song sounds.

One old-school engineer we know well considers automation and recall to be the single most important advance in modern recording - and it's difficult to argue, particularly if you've ever experienced the abysmal anguish of blowing a magical mix just as the song neared its end. Yet entire musical genres have sprung up around mixing as a live, transient performance that's of equal importance to the music recorded on the tracks.

There is something to be said for the realtime interaction between engineer and console. Again, it's about hearing without seeing; and more than that, it's about the fun and inspiration that can come when working without the safety net of total recall.

7. The smell of ferric oxide in the morning

OK, cutting and slicing edits on precious spools of tape may have been a nerve-shattering process (especially if you were taking a razor to someone else's recording), but working with tape had a few positive benefits as well, not least being that gorgeous, saturated and slightly compressed sound when the levels were slamming.

It was also easy to knock out some seriously cool effects - like a backward guitar track, or slowing the speed way, way down for spooky interludes. Yeah, we can do this stuff in our computers, but it just felt so much more adventurous when using tape.

Anyone who had even a modest pre-DAW project or home studio has been witness to the wide-eyed, slack-mouthed expression worn by visitors when they first clapped eyes on the racks full of gear and a mixing console festooned with sliders, knobs and buttons - invariably followed by a stammered "do you really know what all those knobs and buttons do?" Heck, if you had any sense, you felt it yourself each and every day upon entering your room.

In the eyes of visitors and/or clients, we were freakin' wizards - masters of mysterious and arcane arts and keepers of those most precious secrets of audio recording and production. In answer to the previously cited query, why yes, we actually did know what all of those knobs and buttons did - and some even got paid to exercise that hard-earned knowledge.

Those that could do it well were called upon again and again by musicians who appreciated a good engineer capable of bringing out the best in a performance. Back then, musicians could concentrate solely on becoming better musicians while engineers could focus on making sure their art was accurately documented and beautifully framed.

It's pretty obvious why it might make our list of things we don't miss (look out for that one soon...), but to those of us who were there, limitations were as big a help as they were a hindrance.

Today's desktop producer faces a bewildering number of choices at every step in the production process. In the pre-DAW era, most of us had to make do with a limited number of instruments, effects, channels and tracks. Yet these limitations forced us to exercise our creativity, eking the most from what we had.