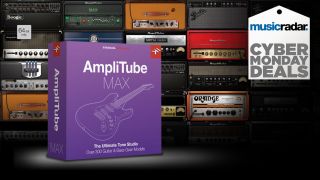 The Cyber Weekend cheap plugins train keeps on rolling. Waves has already got in on the act with these great plugins deals for guitarists, but now IK Multimedia is getting in on the action with a phenomenal deal on these great amp modelling plugins.

Right now, you can get $250 off IK's AmpliTube Max plugin suite. This tone-packed bundle is jam-packed with great guitar sounds for recordings. It's usually $499, but today you can land it for just $249.

But that's not all, you'll also get IK’s awesome Cab Room, an onboard eight-track recorder and crazy range of guitar amps and pedals, arming you with everything you need to record amazing guitar sounds.

This guitar plugins deal is available right now at Sweetwater.

IK Multimedia AmpliTube MAX: $249 at Sweetwater
This all-encompassing suite of guitar amps and effects is half-price right now at Sweetwater, making it one of the best guitar plugin deals we've seen so far across Cyber Weekend.View Deal

Cyber Weekend deals from around the web