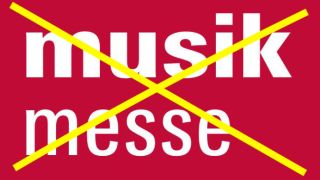 Frankfurt Musikmesse, the massive Euro gear show scheduled for 1-4 April has been postponed in consultation with local health authorities.

"The ongoing spread of Covid-19 in Europe," reads an official statement, "called for a reassessment of the situation in close cooperation with the public-health authorities in Frankfurt who require that steps be taken to prevent event participants from high-risk regions coming to Frankfurt and visiting the fair when ill."

Sister show Prolight + Sound 2020, which runs concurrently with Musikmesse, has also been postponed with projected new dates of 26-29 May. At the time of writing there is no confirmation of news dates for Musikmesse itself.

The cancellation must also cast doubt on the viabilty of Berlin synth show Superbooth, despite the expo's recent “relax and make music” statement. Superbooth is currently scheduled for 23-25 April.

Full Musikmesse statement
Given the increasing spread of Covid-19 in Europe, Messe Frankfurt has decided to postpone Musikmesse 2020. The health of exhibitors, visitors, contractors and employees has top priority for Messe Frankfurt.

The new dates will be announced in the near future. Visitor admission tickets continue to be valid. From the current perspective, the ‘Musikmesse Plaza’ pop-up market (3 and 4 April) and the ‘Musikmesse Festival’ (31 March to 4 April 2020) can take place as planned. These events are aimed primarily at a regional audience from the greater Frankfurt area.

The ongoing spread of Covid-19 in Europe called for a reassessment of the situation in close cooperation with the public-health authorities in Frankfurt who require that steps be taken to prevent event participants from high-risk regions coming to Frankfurt and visiting the fair when ill.

"Given that these participants could also be infected by Covid-19, it is necessary to conduct a health check to prevent the infection spreading even further. This is an important part of the infectiological risk assessment. Messe Frankfurt is not able to implement such measures. Additional factors behind the decision include the growing number of travel restrictions, which will make it difficult for many potential visitors and exhibitors to get to Frankfurt.

“The current situation represents a major challenge for fair and exhibition companies from all over the world. We regret that the 40th anniversary edition of Musikmesse cannot open its doors from 1 to 4 April. However, we are looking forward to some great concerts for fans from the region at Musikmesse Festival, which will be held at a variety of venues throughout Frankfurt.

"Additionally, we continue to extend our invitation to music lovers to visit the ‘Musikmesse Plaza’, where they can not only see and buy instruments, recordings and lifestyle products but also take part in numerous events”, says Detlef Braun, Member of the Executive Board of Messe Frankfurt GmbH.