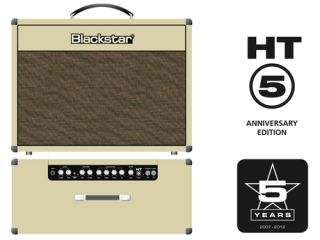 Blackstar Amplification launched five years ago in Frankfurt at Musikmesse 2007, so it's fitting that Musikmesse 2012 will see the company celebrate five years in the business with not only it's biggest product announcement to date in the shape of the ID Series, but also a new, limited edition version of the popular HT-5.

"Based on the award-winning HT-5R, the HT-5TH has the same patented features but with a unique cosmetic: cream covering, anniversary weave fret cloth and limited edition front panel. Each unit will also come with a unique certificate signed by every member of the Blackstar team.

"The production run will be limited to just 2500 pieces worldwide. Visit Blackstar Amplification for more."