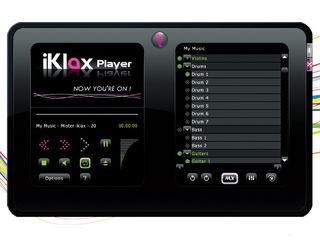 iKlax is another new digital format. Will we remember it come 2010?

Fame in music can be a temporary thing, as we all know, and 2008 has been no different.

Whether it's people on comebacks, technological trends or nuts stage invaders, the following folks and phenomena burned into our retinas briefly and brightly in 2008.

We can only predict that 2009 will also bring some tales of unexpected musical fame.

2008 was the year that saw artists of all musical persuasions decide that it would be a good idea to give fans their stem files and let them have a crack at producing their own remixes. Typically, Radiohead got all the headlines, but the likes of Public Enemy, Mariah Carey and Kanye West were at it, too. The practice is sure to be repeated in the future, but the days of it being seen as a novelty are gone. Ben Rogerson

2008 has been the year of the fake rock star. And we're not just bitching about the state of modern music either. Back in July, just when we thought David Lee Roth had almost died after putting some nuts in his mouth, it turned out that it was a an impostor all along. Fake DLR had nothing on the fake Francis Rossi though. He managed to dupe a whole town. Chris Vinnicombe

While the general public happily got on with downloading MP3s and putting them on their portable music players, several companies decided to offer them alternative solutions that purported to be The Future. iKlax, MT9 and MXP4 are all designed to let users 'interact' with their music, but the chances of one or all of them going the way of Betamax would appear to be high. Ben Rogerson

You are likely wondering who the hell Spencer Elden is. Well, it turns out that he was the baby photographed back in 1991 for the cover of Nirvana's Nevermind LP. For reasons only known to himself, Elden decided that the 17th anniversary of the album's release would be a good time to recreate its cover. Just be glad that he decided to wear shorts this time around. Chris Vinnicombe

Back in March we reported to you about the iBand, a group of smart-alecky art students from Austria who jacked up their iPhones and a Nintendo DS with music-making apps and put out a couple of engaging YouTube videos in which they played their own songs. Rather than become the next Kratwerk (or even Devo), however, the iBand faded into relative obscurity, half-hit wonders. I can only hope the members are taking their school work seriously. Joe Bosso

No, that's not MusicRadar saying the musical output of an entire continent is due for the critical elbow in 2009. It's us saying that next year, young indie bands looking to follow in the likes of Vampire Weekend, Yeasayer, The Dirty Projectors, Foals etc into the fickle hearts of the blogmasters will likely be armed with something more than just a copy of Graceland and a dictaphone. Mike Goldsmith

Kuntz by name, nuts by nature

Remember when David Lee Roth put nuts in his mouth and almost died? Turned out it wasn't Diamond Dave after all, but one David Kuntz, a ne'er do well who had been slipping through the fingers of Canadian law officials for some time, wrecking havoc and generally making an ass of himself while claiming to be Van Halen's singer. Say...whatever happened to him anyway? Joe Bosso

See, you've forgotten him already? Sullivan was the 47-year-old (!) man who pushed Noel Gallagher offstage in Toronto, breaking three of the Oasis songwriter's ribs. Ouch. Sullivan will get another 15 minutes of 'fame' when he's sentenced in 2009. One of Gallagher's new year's resolutions should be: learn to deal with stage invaders the Keith Richards way. Michael Leonard

The Loudness War all but destroyed certain MusicRadar staff member's enjoyment of Metallica's Death Magnetic - essentially a great album but by bejebus's beard, the mixing is awful. The trend of sacrificing dynamic range in favour of louder finished tracks (so the song stands out compared to others) is nothing new, but Metallica took it to preposterous new heights this year - only to receive a backlash from fans. It's sad when commercial sensibilities negatively impact on a piece of art; we hope the Death Magnetic debacle will serve as a potent deterrent to anyone wanting to go 'one louder' in 2009. Chris Wickett