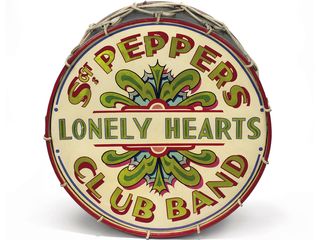 When Christie's first announced its rock and pop memorabilia auction for July, it gave the star attraction (the drumskin used on the cover of Sgt Pepper's Lonely Hearts Club Band) a 'conservative' £100,000 - £150,000 estimate. Times that by four and you'll get close to the eventual selling price: a staggering £541,250 ($1.07m).

In fact, all the big-draw items outsold their estimates. John Lennon's handwritten Give Peace A Chance lyrics and sunglasses sold for £421,240 and £39,650 respectively and Pete Townshend's Gibson SG Special went for £32,450.

Buyers details have not been released, but we're hoping to see a well-dressed one-man-band singing Give Peace A Chance on the doorstep of his re-mortgaged mansion very soon.