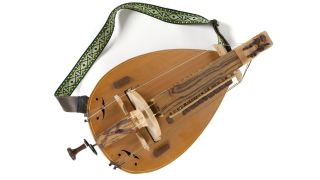 Neil Young is putting a trove of personal possessions, including several interesting guitars and a slew of vintage recording gear, up for auction.

A slice of the proceeds will go to the Bridge School in California, which Young's ex-wife Pegi Young co-founded in 1986 for children with severe speech and physical impairments.

“Collecting all of these items has been my great joy. They have provided a source of inspiration, fun and creativity throughout my life,” Young said. “Now it is time to share them with others in the world whom I hope will enjoy and love them as much as I have.”

The guitars, pictured above, include a 1935 Martin F-7 acoustic and a 1957 Gretsch Country Club 6182, amongst several vintage gems. There are more modern items, like his 1999 Gretsch White Falcon SS, but all of the estimates look overdraft-worryingly reasonable to us.

Hurdy-gurdy fans (you know who you are) can compete for one heard on Young's Silver and Gold item. Rest assured, we won't be standing in your way.

Of arguably even more interest to the tonehounds amongst you is the smorgasbord of vintage amps, mics and other recording gear on offer. Our personal pick of the bunch, straddling both camps, could be this '60s Silvertone electric guitar and suitcase amp case, pictured below.

Other highlights include several Marshall half- and full-stacks, and a veritable pile of Universal Audio preamp console modules, below.

For a full listing of items and more details on the 9 December auction - which in reality will be dominated by three vintage cars and parts of Young's famous model train collection - head over to the Julien's Auctions site.