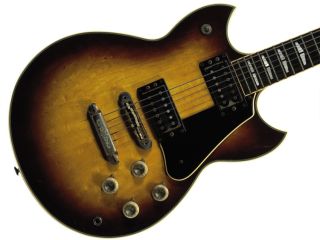 Bob Marley's Yamaha SG1000 electric was a big scoop for Christie's latest pop culture auction. Along with John Lennon's Vox organ and Kurt Cobain's bass, the guitar was expected to fetch $30,000 - $40,000 on 24 November. Now, Aston Barrett - bassist and founding member of Bob Marley And The Wailers - has filed a lawsuit claiming the axe was his.

Barrett says that Bob Marley gave him the Yamaha after The Wailers' final worldwide tour in 1979, two years before the legend died. In 2000, he gave it to Angus Reid for "safekeeping."

Barrett was - quite understandably - "shocked" when he learned his prize possession was heading for auction, and is suing Reid and Christie's for $50,000 compensation and the guitar's safe return.

We've asked Christie's for more details on the sale and we'll endeavour to keep you posted. In the meantime, TMZ has a copy of the official summons.

UPDATE: Word from Christie's is: "It [the guitar] was withdrawn from the sale and not sold." Nice to see that some people wave a white flag when approached with a lawsuit.