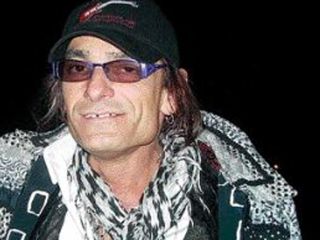 Not your Ice Cream Man

It's been the nuttiest story for the past week, the man who was rescued by Canadian police after suffering an allergic reaction to nuts, only to insist that he was singer David Lee Roth.

Turns out the man really is nuts, and possibly dangerous.

His name is David Kuntz, and he's a musician who's been tooling around Ontario for a number of years. According to a source, Kuntz celebrated slipping through the fingers of the law last month by "[breezing] into a Brantford bar with a few women in hospital scrubs on his arm.... between sips of orange juice mixed with ginger ale and cranberry juice, [he] climbed onstage with a local band and belted out a few bars of Ice Cream Man, an early Van Halen tune."

But Mr Kuntz has led a less-than-smooth life since he left home in Cambridge in the early 1980s at age 18. "We've lost contact with him," his father, also named David Kuntz, said yesterday, adding that the last he heard, his son was living near Chilliwack, British Columbia. "I don't know what he's doing."

In July of 1988, the younger Mr Kuntz, who had a band called Madjesty, found himself in the middle of a deadly love triangle, when one of the two women he had been seeing killed the other in a jealous rage. Kimberly Blinkhorn, 28, slashed and stabbed 21-year-old Rowena Parsons 70 times, and was found not guilty of murder by reason of insanity. (Can you say, "Yikes!"?)

The real-life Roth has celebrated multiple female fantasies in song for years, but even he couldn't have imagined something this grisly. At MusicRadar, all we can say is, should you encounter a man who claims to be Diamond Dave, better check for an ID.