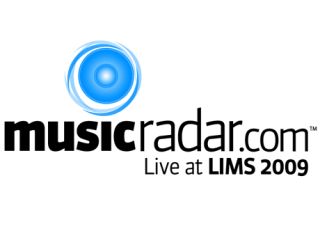 Next page: this way to the show floor...

And we're in! The day before opening and we're greeted with the Marshall stand "in progress". Ahem.

And we're "in progress" too. We give you the small (if imperfectly formed) MusicRadar stand. Somehow, we went from disorganised chaos to...

...the finished article! Welcome to day one!

...it's Spinal Tap's Nigel Tufnel! Well, it's his guitar. Behind glass. On the Music Man stand. Where's a hammer when you need one.

Roland V-Piano: look but don't touch. Unless you have that hammer we mentioned back on the Spinal Tap page.

"MusicRadar, where have you bin all my life?!"

Now that's what I call a V-Drum... One of four walls of sound.

Yes, you are allowed to be very proud of your custom paint job, Mr Inky Hollow Guitars.

Steve Vai mania! Biggest crowd of the show, hands down.

I SAID, WHERE'S MY HAMMER?!

Obligatory Guthrie Govan shredding shot. Wouldn't be a show without him...

The view behind the scenes. Arf.

And you'll never guess what this is (via the weirdest stand of the show).

Back to the MusicRadar stand. Hang on, Neville looks diff... oh no, it's Mick from Guitarist with a 12-year-old 'blues star in the making' called Adam

We give you SpongeBob SquareBand.