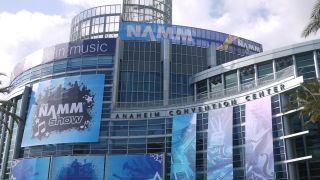 NAMM, like any music trade show, is a place of both thrills and spills. With the music-making industry's largest event just around the corner, we take a look at some of the classic traits of a guitar show.

Call it NAMM bingo, or trade show I-Spy, here's a countdown of 10 things you'll see at a guitar show...

Quadruple-necked basses, lava-lamp lutes, mirror-effect mandolins, glow-in-the-dark ukeleles… no sane person would ever buy one, of course, but it might just draw punters close enough to the booth for the sales gonks to start plugging their boring new practise combo.

Tucked away in a corner of Warehouse Z, you'll spot a forlorn-looking gentleman sat at a camping table, wondering why his guitar strap grommets aren't really setting the world on fire. Whatever you do, don't make eye contact.

For one weekend, everybody's fussing over the brand new model for the ageing glam star, which has a star-shaped headstock and its own makeup bag. Eight months later, the guitar will be pulled due to poor sales and they'll be all over eBay.

Back home, you're the best player at the barbecue, able to muddle through Communication Breakdown with only a few bum notes. Here, the sheer concentration of warp-speed widdlers means you won't touch a guitar all weekend, for fear of being laughed out of the building.

Sure, there are big names who make fleeting appearances, but mostly, the booths are inhabited by esoteric singer-songwriters who may once have played in Die Toten Hosen, wear snakeskin waistcoats and spend set-breaks eating sandwiches from a tupperware box.

While your eardrums wonder why you're trying to perforate them, your stomach is wondering why the only thing that's come down the pipe in the last three days has been Pringles, sausages, beer and chips, and if you're trying to reenact Super Size Me up there. It's the recipe for a long, rough flight home…

And finally, somewhere in the melee, you'll find us, your intrepid gearhounds, braving the tinnitus, steering clear of the slap-bass demos, elbowing past other guitar journos, risking the food poisoning and praying to the gods of wifi, in our quest to bring you the best new gear first. Hey, it's a tough job, but someone's got to do it…