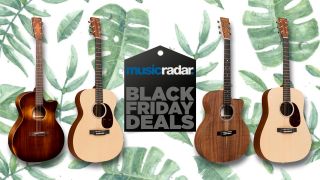 So it's official, the Guitar Center Black Friday deals have landed, and we're busy picking out the highlights for you. If you're looking for a new acoustic guitar then these Martin deals could be right up your street.

These four top acoustic guitar deals are exclusive to Guitar Center and include $100 off both auditorium and dreadnought versions of the X1 series acoustic-electrics. Right now you can pick one up for just $499.99.

Both X1 models feature a solid spruce top with decorative rosettes and a back and sides made from a forest-friendly HPL material. Both acoustics also come complete with trusty Fishman electronics.

The Martin Special Grand Performance 15ME Streetmaster guitar features a mahogany body with a sitka spruce performance A-frame and a single cutaway. This guitar is built for performance, with the look of a well-used instrument and the feel and playability of a brand-new guitar.

If you're looking for an exlusive this Black Friday, Guitar Center has the stunning Martin GPC Special Koa X Series Grand Performance Acoustic-Electric on sale right now for just $599.99. This guitar is ideal for singer-songwriters and has been crafted to produce a wholesome, full sound that belies its natural look.

Want a genuine Martin for less? Now could be the time to strike.

Martin Dreadnought X1-AE acoustic: now $499.99
This stunning acoustic-electric was originally prices at $599.99. You can grab it today for $100 off the asking price with this amazing Guitar Center Black Friday bargain. View Deal

Martin Grand Performance 15ME Streetmaster: $1,399.99
Save a huge $200 on this stunning acoustic-electric. With the look of a well-used guitar and the playability of a brand new instrument, this is one unmissable deal.View Deal