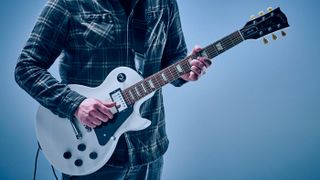 30-day guitar challenge 2018: Welcome to this year's challenge! We're started off with some ideas for more melodic leads, drawing on classic Americana styles

Use chords and arpeggios for a sweeter approach to soloing. Here’s how…

Mixolydian is a versatile scale. Its sonic signature is generally relaxed - not as bright as the major scale, less moody than any minor scale yet still leftfield enough for progressive and psychedelic lines. Played over a D-C-G progression you have a scale that works better than a standard D major scale line would.

Using the first and third strings, this arrangement of the G major scale uses pairs of notes separated by six steps in the scale. Play with a fairly clean sound and you’ll quickly be in soul, folk and Americana territory. Notice some of the notes are on the same fret, but some are ‘staggered’ a fret apart - this is so that all the notes come from the same scale.

Viewing these as two-note movable chords - albeit on non-adjacent strings - makes it easy and quick to play interesting lines that outline the harmony of a chord progression in a way single notes rarely can.

Generally, use your first and second fingers for one shape to leave your third and fourth fingers free for the second shape.

While holding your pick between thumb and forefinger, try adding in those spare pick hand fingers.

It’s a great way to play simultaneous notes on different strings, but being able to play two or three notes together, exploring bass and treble in one lick. It’s a staple country technique used by Albert Lee and Brad Paisley.

In the Mark Knopfler/clawhammer style position, thumb and forefinger take the place of alternating up and downstrokes, but offer a more tactile experience and a softer tone, unless you pick up and outwards, causing the string to slap back against the frets. John Mayer and Jeff Beck are great fingerstylists too.

This clean tone line mixes simultaneous and staggered 6th intervals to create a melody that arguably suits this style better than more conventional rock or blues soloing. Try different pickup selections and a splash of reverb and you’re ready to go. Bernie Leadon of the Eagles had a nice touch with this kind of soloing.

This line shows just how good the Mixolydian scale can sound over a basic D-C-G chord progression. The major scale sometimes sounds too bright, too happy and just not moody enough. The recurring C note lends a note of tension, acting as a b7 over the D major root chord and as an 11th over the G chord.

Quick tricks - all you need for sweeter solos

If you choose to use a cleaner tone, perhaps you might want to consider a more ‘textural’ approach to your playing. Crowded House famously created an unusual phasing sound on Weather With You, partly the result of a studio effect but also from two E notes ringing out together. In Tracy Chapman’s Baby Can I Hold You Tonight the vocal melody in the last chorus is doubled with an almost sitar-like guitar tone, proving less is often more.

A little bit of music theory goes a long way

Knowing the notes of the key signature you’re in can transform your solos. The key signature tells you the ‘right’ notes - notes that form coherent chord progressions and solos that ‘fit’ over the top. For example, our 6th interval lick uses notes from the G major scale (G A B C D E F#). 6ths are pairs of notes played six steps apart in the scale, G-E, A-F# or B-G for example. It’s a simple pattern - find the notes on the fretboard and the pattern unfolds.

Learn to recognise chords by ear

Playing the individual notes of a chord is known as an arpeggio. It’s a tuneful alternative to scale-based soloing, guaranteeing that you’ll be in tune with the backing - you’re using the same notes, after all. Major and minor arpeggios are easy to memorise by ear and it’s really worth the effort. Play G-B-D to outline a G chord; C-E-G spells out a C chord; A-C#-E gives you an A; A-C-E is Am; and E-G-B is Em. Play the arpeggios on your guitar then sing them back to yourself.

Listen to 1989 by Ryan Adams and you’ll hear a wide range of guitar tones, textures and melodies. These are often simple arpeggios embellished with a few easy to reach notes. Keep the idea simple and you’ve got a tasteful and textural rhythm part to sing over; add a note or two into the mix and you’ve got a lead break to take the song somewhere new. In this style, solos really don’t need to be a technical workout when you’ve got a solid melodic idea.