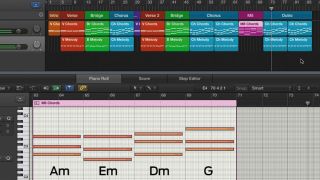 Musical arranging isn't the easiest of concepts for the novice producer to get their heads round, so let's strip everything right back in order to make it as clear as possible. We're going to take a straightforward series of chords and use it as the basis for a full developed song, complete with intro, verse, chorus, bridge, middle eight, tag and outro sections.

Step 1: Let's take a simple musical idea and mould it into a basic arrangement for solo piano - this will allow us to focus on musical arrangement techniques, rather than production-based ones. Here's an eight-bar section containing the progression C - Am - F - G, each chord lasting for two bars. To start our song, we'll call this the verse section. You can download the Chord-progress-midi.zip file to access the MIDI files to help you with this guide.

Step 2: Note that the chords we're using are all diatonic to the key of C major. This means that, if we take all the notes in the C major scale and build chords by stacking alternate notes as shown, we end up with seven diatonic chords: C, Dm, Em, F, G, Am and Bdim. 'Diatonic' just means that the chords contain only notes from the parent scale of the key we're in, which is C major.

Step 3: Here's a cool little verse melody that fits over the top (we can sort out the lyrics later!). The melody also uses notes from the C major scale, so we know that it'll work with our chords. We now have a complete verse section, so let's construct a bridge that'll form the link between it and the chorus.

Step 4: The bridge will be the same length as the verse (eight bars), and we'll use the same number of chords of the same length (two bars each); but we need different chords to take us up to the chorus. To create a variation, we duplicate the verse section and change two of the chords, using more from our diatonic palette. C becomes Em and F becomes Dm, giving us Em - Am - Dm - G.

Step 5: Melody-wise, the bridge could do with being quite different to the verse, to distinguish it further as a separate section and lead up to the chorus. So we could do with something that ascends up the keyboard pitch-wise - which will build tension and excitement - and also has a different rhythm to the verse melody. Something like this will do the trick.

Step 6: For the chorus, we want the chords happening twice as often - in other words, driving the song along and making the chorus more impactful and exciting than the verse. We use the same progressions from the verse and bridge, but just shorten the chords from two to one bar each, squeezing them into an eight-bar section to form the progression C - Am - F - G - Em - Am - Dm - G.

Step 7: Since we've simply resequenced the same chords from the verse and bridge sections, the melody we used for the verse will also work for the chorus. So we duplicate the part and, just for variety's sake, adjust a note here or there in the second half so that it works better with the chords we took from the bridge section.

Step 8: Now we have the main chunk of the song in place, we can work more on the actual arrangement. We start by adding a two-bar tag after the chorus - just two bars of the tonic chord C will do the trick - after which, we can repeat the entire verse-bridge-chorus section again. For luck, we also double the second chorus to 16 bars.

Step 9: In the middle 8, we go to an Am for the first chord for a change of mood, followed by Em, then Dm, then G to bring us back into the C on the downbeat of the chorus. The outro is just two repeated choruses, and our final task is to fashion a four-bar intro section from the first half of the first verse.