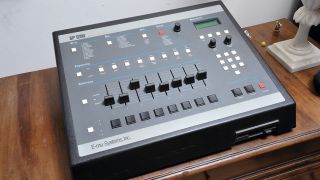 E-MU's SP-1200 was one of the first relatively afforable samplers.

Though digital sampling has been in existence since the 1960s, the first commercially available models were Harry Mendell's Computer Music Melodian and Fairlight's CMI (Computer Musical Instrument).

It was the latter which really caught on, and though primitive by today's standards, it was truly revolutionary for the time, offering the ability to sample at 24kHz and edit waveforms with a built-in lightpen.

The drawback was the device's $18,000 price tag - equivalent to more than $58,000 in today's money! Naturally, this meant it was only accessible to established artists, and early adopters included Peter Gabriel (check out the archive video below), Thomas Dolby and Kate Bush.

Thanks to digital technology's decreasing manufacturing costs, the first relatively cheap samplers began to appear in the mid-to-late '80s. Classic hardware like the E-MU SP-1200 and Akai S950 made sampling available to studios that didn't have astronomical budgets, and hip- hop was the first genre to explore the sampler's ability to recycle musical ideas and put them into entirely new contexts.

Hip-hop had been founded on the instrumental breaks of funk and rock tracks since the '70s, and pre-sampling records like The Sugarhill Gang's Rapper's Delight and West Street Mob's Break Dance utilised session musicians replaying famous grooves, or turntablists cutting up breaks. Now producers could simply sample their favourite parts of songs and cut them up in exciting new ways.

A genre that couldn't have existed before the advent of the sampler is hardcore rave, which combined sped-up hip-hop beats with sampled techno stabs and house vocals to create a new style of hi-tech music. Affordable, all-in-one sequencers and samplers like Roland's W-30 workstation keyboard would allow musicians like The Prodigy's Liam Howlett to practice an early form of 'in-the-box' production, putting together beats, basslines and leads within a single piece of hardware.

Howlett and contemporaries like Joey Beltram would pioneer resampling by recording sounds from synths and using their samplers' editing and modulation features to twist them into exciting new sounds, resulting in revolutionary tunes such as The Prodigy's Charly (video below) and Second Phase's Mentasm.

This approach to making music was new to everyone in the late '80s and early '90s, and the thorny issue of copyright infringement quickly appeared. One of the most high-profile cases is that of Black Box's sampling of a Loleatta Holloway acapella for their international megahit Ride On Time. The record very obviously used snatches of the diva's Love Sensation to create the stuttered vocal hook used prolifically throughout the record. What's more, the video (see below) featured a model miming along to the vocal, and even though Black Box had cleared the sample by organising a licensing agreement with the label that released Love Sensation originally, they faced a legal challenge from Holloway's lawyers for not crediting the vocal.

Clearly, the legal situation can be complex. To cut a long story short, if you publish music that samples another's work without permission, you could theoretically face a legal challenge from the copyright owner, no matter how short or (un) recognisable the sample.

In practice, a huge amount of music does feature uncleared samples - lawyers most often come knocking if you're using immediately recognisable samples and making a bit of money.

While many producers have got away with using unlicensed samples - famous 'breakbeats' such as the drum solos from The Winstons' Amen, Brother and Lyn Collins' Think (about it) have been used on thousands of unlicensed tracks, from underground releases to chart hits - there was a growing demand for samples that could be used without fear of legal consequences. Early sample CDs often featured unlicensed, copyright-infringing content, but the mid-'90s saw a shift to material that had - ostensibly, at least - been created from scratch.

Most sample libraries now include a license that states the party that has purchased the library can use the audio material in musical works without having to pay royalties, and many artists have scored big hits with material from sample libraries.

For much, much more on the art of sampling, from basic audio editing to building full-on multisampled instruments, be sure to get your hooks into the September issue of Computer Music (207).