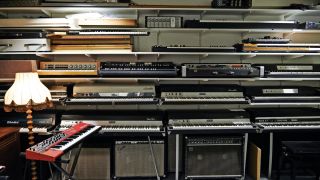 By sampling a sound multiple times across a variety of keys and octaves, we can replicate the inconsistencies and detail of a real instrument or human performer so that it's pretty much indistinguishable from the original source. Thanks to multisampling, we now have access to an indefinite palette of pro-quality sounds captured from priceless hardware synths, world-class pianos, famous drum kits and even entire orchestras. Synthesists can load classic synth patches or raw analogue waveforms on a basic laptop setup, or even turn monosynths into polyphonic monsters.

Working with multisampled patches requires skill and patience, however, so we've put together nine tips and techniques to help you get the job done. Aiding us in this endeavour is Cyclick Samples founder Robbie Stamp - a man who knows more about multisampling than is probably healthy.

1. Dealing with levels, noise and effects

Cyclick Samples' Robbie Stamp: "Have a clear idea of what you want the instrument to do and consider the characteristics you need to capture to achieve this. Be very aware of noise - intentional and unwanted - as this will build up and can become overt in comparison to the source instrument. Also, be sparing with effects, especially EQ and compression - these can be added afterwards and tend to be more cohesive when applied to the instrument as a whole. For instruments to be played with multiple voices, make sure the RMS level is below -6dBFS as they will quickly add up to a clipped output."

Multisampling short notes will mean you have to spend more time setting up loop ranges for each sample. Hard drive space is plentiful these days, so save editing time and sample longer notes - 6-10 seconds should suffice.

While multisampling is most widely used for instrument reproduction, a sampler's multisampling features can also be used to speed up general sample auditioning and workflow. For example, you might want to compile bespoke patches consisting of your favourite drum samples: drag a large collection of one-shot drum samples into a sampler's key mapping editor, map each hit to its own MIDI key, then save this as your 'drum hits' preset. The process of auditioning samples is now as simple as loading up this preset and hitting MIDI keys until you find the perfect sample in the context of your track.

Amplitude envelope settings define the sound's volume response - a short pluck will probably have a tight decay and minimum sustain, while a floaty pad will have slow attack and release - but it's always a good idea to remove ADSR settings before multisampling. Make a note of the synth's amp settings and recreate them within your soft sampler once you've compiled the patch, so you can dial in different settings later.

For the same reason, it's also recommended to fully open the filter cutoff to maximum and reset resonance to minimum before sampling notes, then apply the desired filter settings within the sampler. This is fine if you want the bright, raw tone of the sound, but a synth's filter can play a huge part in the resulting character - so you may wish to capture some of that 'mojo' within the initial source and record several filtered variations before compiling the final patch.

If your friends or local studio have an enviable collection of hardware synths, spend a few hours recording multisamples of them. You can then take the raw audio home and edit the separate notes into killer sampler patches for your own collection.

Robbie Stamp: "Instruments with a lot of presence in the mid range can come out a bit raw when multisampled. For example, when chords from an analogue synth are played, compression occurs through saturation/clipping, mitigating mid range build-up - sampling individual notes will bypass some of this effect.

"Noise sources also need forethought; they do not always have a multi-voice aspect, so when you play a chord on a synth you may not get a noise component or voice per note, but you will if it's in the multisample. Sample the noise separately and spread this across the keyboard in a single voice group so it only sounds once."

Most samplers can load different sampler formats, so dig out any old sample CDs and convert the patches to your preferred modern format.

Consider trying more unusual multisampling methods to improve compositional flow. Imagine you're jamming a few chords with a polysynth: when you want inspiration, you may want to just turn the synth on and record a bunch of chords onto your DAW's timeline as audio. Chop up the individual chord notes, then compile these separate audio files into a multisampled patch, with each chord mapped to its own key. The MIDI notes you press obviously won't correspond to the chord that's being triggered in a musical sense, but you'll be able to improvise various chord sequences and combinations quickly.