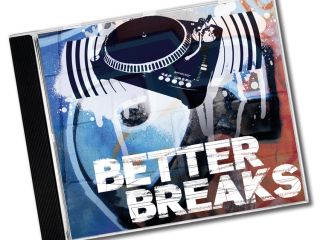 Make sure your breaks aren't broken.

The practice of lifting drum beats from other people's records could've been seen as something of a necessity back in the early days of the digital home studio.

After all, as a DIY recording artist in the '70s or '80s, the only other ways you were going to get professional-quality drums on your recordings were if you hired a studio and a session drummer for a few days, or you used a drum machine.

However, despite a proliferation of cheap and affordable drum plug-ins, sampling existing breaks is still popular today. Getting these to 'work' in the context of a track isn't always easy though - we're going to address some of the most common concerns.

1. "My breaks sound too slow"
A sluggish-sounding rhythm section will often tempt the inexperienced producer towards unnecessary tempo nudging and a tendency to cram in as many breaks and percussion loops as possible. Frequently, the real problem lies in the precision timing of the drums.

A late (or 'lazy') snare will always give your beats a laidback, dubby feel, whereas a snare cut right on the attack will push a beat forward and add a sense of urgency. Don't trust ReCycle! to get this right! Always adjust slice points manually.

2. "My breaks lack energy"
When working with sparser arrangements, sometimes even the tightest of breaks may need an extra something to help push things along and add a sense of continuity between hits.

A high-pass filtered breakbeat or percussion loop with a lot of top end can add just the movement you need. Long-time favourites for this role are the classic Hot Pants and Think breaks. But a few single-hit percussion samples sequenced on 16th-notes can be just as effective.

3. "My breaks lack weight"
For many of today's producers - those who are focused on maximising available bandwidth as much as possible before their limiter plug-in starts to sound like a distortion pedal - what we're about to suggest may induce panic. However, this old-school technique, a long-time favourite of The Prodigy's Liam Howlett, might just be one of the best kept secrets in dance music.

Set up an FX channel with a long plate reverb followed by a low-pass filter set to around 60Hz. Send all your drum tracks to this FX channel and mix it in softly to add a booming warehouse effect.

4. "My breaks sound weedy"
The compressor's usually your first port of call when it comes to fattening up pokey-sounding beats. However, as compression reduces dynamics, there's only so much you can do before your drums start to suffer.

Parallel/NY compression involves mixing the dry signal with a heavily compressed signal, enabling you to beef up drum parts whilst preserving dynamics. To do this, send all of your drum tracks to an FX channel loaded with a very fast compressor with a high ratio, and mix it in subtly alongside the dry signal.

5. "My breaks lack clarity"
A lot of old breakbeats will sound thrashy and dull in their original state, thanks to the often very lo-fi conditions under which they were recorded. There's only so much you can do about this with processing. It can be tempting to flatten breaks with EQ, but rather than doing that, think about making a few narrow-band cuts in problem areas and then using a harmonic exciter/enhancer to add clarity in the top end.

Your other greatest asset here is layering: TR-808 and 909 drum samples following the pattern of the breakbeat and mixed in subtly can add more clarity and definition than you'll ever achieve with EQ.

6. "My breaks lack breathing space"
There's a tendency among dance music producers to fill up every available frequency band with instrumentation - but the more you try to cram in, especially above 1kHz, the more your mix will start to resemble white noise.

Breathing space can be maintained by keeping a good level of movement and dynamics in those troublesome upper-mid frequencies, so make use of high-pass filters, expanders and envelopes to keep things snappy, uncluttered and defined in that area. A little limiting on the mix bus can keep things peaking evenly.

7. "My breaks still sound wrong!"
It's easy to get obsessed with the seemingly limitless possibilities offered by the modern sequencer, but sound engineering's never been about doing the impossible; it's really about getting the sounds as near perfect as possible at the source.

If you're having to work too hard to achieve a certain result, it's usually a sign that you're using the wrong sounds. Set yourself a time limit, and if things aren't working out, try a different combination of samples before piling on the plug-ins.