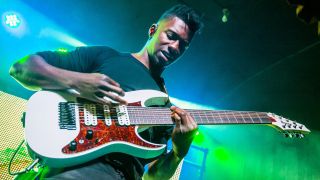 Tosin uses many unorthodox techniques to produce unusual sounds. His heavy Meshuggah-style single-note rhythmic riffs can be heard in tracks such as Tempting Time and Waves Of Babies.

He is perhaps best known for his Victor Wooten-inspired slapping and popping, as heard in An Infinite Regression and The Woven Web. Check out CAFO or Isolated Incidents to hear Tosin's tapping technique.

We've assumed you'll be playing a six-string guitar, so our examples are shown in standard EADGBE tuning or down tuned to EBEADG (for Slapping And Popping, and Rhythmic Displacement). The down-tuning mirrors the lowest six strings on Tosin's eight-string (EBEADGBE).

This is an example of how Tosin keeps a steady, intricate groove in odd time. Use 'down-up' style picking and keep the strings muted with your pick hand.

Fret the Cadd9#11 chord and keep it held down. Pick the first four notes, then, as they sustain, tap the notes shown in circles and pull off to the fretted notes.

Slap bass is one of Tosin's signature eight-string techniques. Keeping your thumb in line with the string, slap it against the highest fret for a trebly, metallic tone. For the 'pops', use your first finger to pull the string away from the pickups and let it quickly snap back. In the tab, 'S' denotes a slap and 'P' denotes a pop.

Tosin generally taps with his first and second fingers; perfect for the two-note chord idea tabbed here. Make sure to tap both strings at the same time.

The repeating A note throughout this riff alternates between 12th fret fifth string and 7th fret fourth string. Use short, sharp taps to produce a staccato sound.

This riff features a repeating phrase that is nine 16th notes long. Of course, nine into 16 doesn't go, so the phrase nearly always repeats on an offbeat.