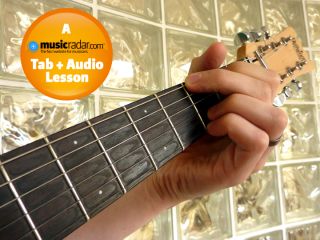 As you may have guessed from the name, triad chords contain three notes. For a major triad we need the root, major third and perfect fifth. For minor triads we need both a root and fifth, but this time there's a minor or flattened third.

There are also five possible minor fingerings, however, the ones for C and G are tricky to play, so most guitarists avoid them. We've written out the most popular three (D minor, E minor and A minor) for you to practise.

The beauty of the open chord system is that the chords sound good and are easy to play. You can access other keys by using a capo (a device that clips around the neck and holds down the strings across any fret to provide a new 'zero' fret). It is possible to write great songs and accompany yourself and others with just this handful of chords - ask Bob Dylan!

For this lesson's example, we've designed a chord progression that uses every open position, major and minor chord at least once. For inspiration we listened to great chord strummers REM, but The Smiths or early Coldplay are also good examples. To make things more interesting, we've included two extra chords (Dsus4 and D/F#). It's well worth learning these extra chords, as they are popular additions to the open chord vocabulary and feature in many songs.

[Verse: Bars 1-8] The chord progression for the verse is simply a four-bar pattern repeated twice. Make the transitions between the chords as smooth as possible and use a loose and relaxed strumming action. To add interest we've included the third of D (F#) in the bass of the D chord (D/F#). This is a common trick when moving from E minor to G via D as it provides a smooth bass line.

The Dsus4 is another common chord and has been used to anticipate the move to G. We've missed off the low third (B, 2nd fret, fifth string) from the G chords as this doesn't sound so good with distortion. Missing out the third from G leaves us with a rock-friendly G5 power chord - very AC/DC!

[Bridge: Bars 9-16] For the bridge I've used a different strumming rhythm and also introduced two new chords (D minor and E major). Switching from a major chord to a minor chord, and vice versa, is a popular compositional trick for changing key, referred to in theory circles as modal interchange.

[Chorus: Bars 17 - 25] This section exploits all the techniques discussed for the other sections. The last chord is A major which provides a surprise happy ending.