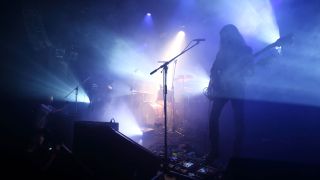 Among guitar circles, Japanese doom merchants Boris are the stuff of legend. Longtime worshippers at the altar of vintage amp heads and infinite drones, the band’s live sound is only comparable to Sunn O))) in sheer volume and reputation.

Now, as the band celebrate their 25th anniversary - and the release of 23rd (!) album Dear - we’ve been lucky enough to get a peek behind the dry-ice curtain and get an exclusive look at the awesome wealth of gear that fuels guitarists Takeshi and Waka’s monumental sound.

We’re talking vintage Sunn and Orange heads, five cabs per guitarist, and more pedals than you can shake a double-neck bass/guitar at.

“I had this bass/guitar double-neck custom-made by First Act. The body is white ash, and the necks are maple with rosewood fingerboards.

“To make it as light as possible, I had them arrange it so that despite the thin body and necks, the low-end would not be sacrificed. I really like the way it plays. It’s really one I couldn’t let go of. Including the balance and sound, it’s the ideal form for me.

“The amps I use with guitar have always been Sunn Model-Ts.

“Currently the two main ones I use live are both ’74 second-generation models. I also have three more, one each from ’73, ’74, and ’75, for a total of five. It’s interesting, because they each have their own individual sound character.

“There’s a lot of headroom, so even when turning it up really loud it still holds together quite well. The feel of the rough mid-lows that are characteristic of these amps is a very important factor for me in making my sound.

“My main bass amp is an Orange Bass Terror 1000. This one also has a lot of headroom, so it doesn’t get distorted at a loud volume, and has absolutely no problem holding together.

“The system is put together centring on a loop-switcher pedal we custom-ordered from a small effects pedal company called Soul Power Instruments (S.P.I.). With two inputs, four outputs, and eight loops, by programming this beforehand, it allows me to switch between different combinations across the double-neck/pedals/amps in an instant.

“Wata is also using basically the same thing, so to say this loop-switcher is the central part of Boris’s sound wouldn’t be an exaggeration.

“For the bass side, my main pedal is a Pro Co Rat I also had modified by the same company, S.P.I. On the bass, I don’t really use many effects besides this distortion pedal.

“For my guitar sound, my main pedal is a Dwarfcraft Devices Eau Claire Thunder. I really can’t imagine using anything else; it’s my ideal sound.

“My DOD Buzz Box and Dwarfcraft Devices SOMMS pedals are also crucial to create an atmosphere of noisy outbursts.

“The EarthQuaker Devices delay/reverb pedal, Afterneath, creates mysterious echoes that sound like you’re inside a cave, and this paired with the Strymon Timeline creates a very deep delay that I’ve been really into recently.”

“My main guitar is an '86 black Gibson Les Paul Custom.

“Since I always play tuned three steps down with fatter strings I’m always surprised when I hold a guitar in standard tuning.”

“I often cause amps to break down a lot, so they’re like children that cost a lot of money to take care of.”

“For distortion, my Elk Big Muff is my main pedal. It’s a Big Muff clone, made by the Japanese company Elk Gakki, but it’s thick and heavy, and I really like the way the chunky sound comes through with a bang. It’s especially good when paired with the tape echo.

“Along with the Elk Big Muff, the Roland Space Echo RE-150 is of dire importance to my playing. Its unique atmosphere, roughness, and unpredictability are wonderful. It creates sounds that could not be made digitally.”

“The Wata Fuzz by MASF Pedals is one I had made for me, based on a Foxx Fuzz Wah. It emits a unique, gravely low-end sound.”

“The Soul Power Instruments loop-switcher is a pedal that was customized for me with two inputs, four outputs, eight loops and send-return. If programmed in advance, with one switch I can switch between everything - not only pedals but also inputs and amps. This pedal plays an extremely important role when performing Boris songs.

“With the EBow, using slides or bends or the manner of approaching the strings, it can create various expressions of sustain. The best.”

If you fancy hearing these sonic toys in person, Boris are in the midst of a 25th anniversary tour - see Sargent House for full dates and tickets.