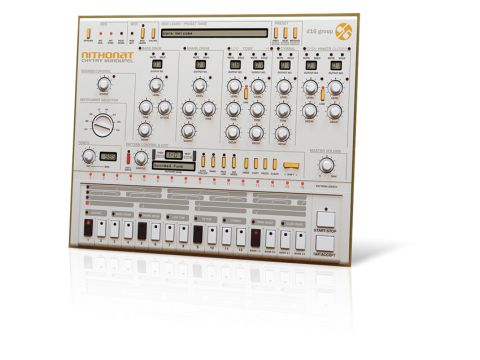 Back in the 80s, the now-legendary Roland TB-303 Bass Line synthesiser promised to provide a realistic backing for solo musicians and resign real bass guitar players to the scrapheap of musical history.

Then, hoped Roland, drummers would be made equally worthless by the 303's sister module, the splendidly-named TR-606 Drumatix. In the end, though, without the huge kicks of the 808 or 909, the diminutive 606 never captured the public imagination, and even those later machines failed to finish off 'real' musicians.

Even so, the 606 still offered up its own tasty toms, snares and hats, and built up a cult following. Now we have a turbo-charged emulation in the shape of D16's Nithonat.

Like the real thing, you get kick, snare, high and low toms, open and closed hats, and cymbal sounds, plus a step sequencer, with pattern-based arrangement capabilities. And, of course, all of the sounds are synthesised in real time.

There are two main ways to use Nithonat in your DAW: as a 'static' drum module (you can set up your own drum maps or use the GM standard), or as a drum machine with onboard step sequencing.

In this latter capacity, the tempo can be synced to the host, so even when you're sequencing within Nithonat itself, it stays in time. You can also map MIDI CCs to the plug-in's various parameters.

The interface design eschews the silver front panel of the 606, but keeps the essence of the original while making space for extra features, such as the ability to split the drums across separate outputs (the 606 had one mono out).

In fact, Nithonat offers numerous improvements over the original 606. The first and most obvious of these is the inclusion of many more sound-shaping controls for each drum (the original only featured Level knobs).

With the knobs set to their default positions, the drums are very faithful to the original, while things like Decay and Tune controls make for greater flexibility. The snare in particular now offers some amazing white noise effects, courtesy of the Tone and Snappy controls.

"The interface design eschews the silver front panel of the 606, but keeps the essence of the original while making space for extra features."

Our second favourite improvement is the sequencing section. Whereas using the hardware to create songs from patterns was a rather laborious real-time process, it can now be done by assigning patterns to keys on a MIDI keyboard and sequencing them.

For us, this perfect marriage of old and new arrangement methods enables some great live play, as you can program in real time or overwrite your existing sequence on the fly.

The familiar-looking step sequencing section that accepts input in two ways: you can select a drum and manually program the steps, or use the gratifying tap mode, in which Nithonat will automatically quantise your hits to the nearest step. Throw in a classic swing function and we're talking about some serious step-based fun.

There are numerous neat lesser touches, too, such as the Randomise function, which enables you to add a touch of the unexpected. The preset management system also offers a level of sophistication that owners of the TR-606 back in the day could have only dreamed of.

No 80s drum machine emulation can ever be considered an essential purchase for all, but if you want the sound of an electro classic in your sonic armoury, then Nithonat offers more than enough to make it preferable to a 606 sampler patch.

The bolstering of the original's feature set is a genuine and worthwhile improvement, and by offering the sequencing and arrangement functions of the original, it recreates the style of music creation that goes with step sequencing. Our only real criticism is the lack of a standalone mode.

Nevertheless, if you make any kind of electronic music, particularly in electro or urban styles, we'd suggest taking Nithonat for a spin - you should be pleasantly surprised.

Listen to some Nithonat-created beats: