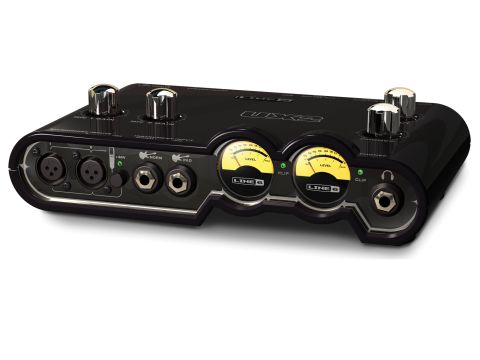 While not being a total overhaul, this refinement of a proven Line 6 product hits its mark more precisely than ever.

The new POD Studio line from renowned amp modellers Line 6 comprises the GX, UX1 and UX2 bundles, with hardware identical to previous versions, but with a black fascia instead of red.

On the UX2, you get 24-bit/96kHz performance, two guitar inputs (one with a volume pad), two XLR mic inputs, a pair of assignable VU meters and a headphone socket.

The older UX2 bundle came with the GearBox software, but this has been superseded by the all-new POD Farm, which has a vastly improved GUI showing a 'carousel' of the units. You simply drag the unit you want into the signal chain display below.

Like GearBox, some units can appear in multiple locations in the chain. Time-based effects can now be synced to the host DAW, but the most enticing new feature is the ability to use two amp setups in parallel.

Pod Farm lacks the MP3 player that Gearbox had, but it's unlikely you'll miss this feature. Overall, the look and functionality is now more tailored towards the guitarist, and while the modelling technology is basically the same, it's easy to see why Line 6 made these changes.

Amp-wise, you get 23 guitar and bass models, including emulations of Fenders, Marshalls and Mesa/Boogies, as well as versions of Line 6's hardware amps. For effects, there are 29 units paying homage to classics like the MXR Phase 90 and Ibanez Tube Screamer.

Line 6 have long been leaders in the amp modelling field and you can hear why. We're particular fans of the JCM800 emulation, which provides a heavy sound with bags of clarity, as do the crunchier Fender-style sounds.

At first glance, it seems that there are literally hundreds of presets; however, some of these feature amps that aren't included in the POD Farm package, which have to be purchased separately. While you can select a substitute amp, you can't help feeling like you're missing out.

Another small problem is that the tuner found in standalone mode is absent from the plug-in.

By including POD Farm, the UX2 has, as Line 6 intended, become more guitar focused. The new software, combined with pro hardware features like XLR input and phantom power, makes the UX2 a great buy for those looking to upgrade their basic setup, not to mention a strong first-time investment.

Listen to some of the POD Farm sounds being played: