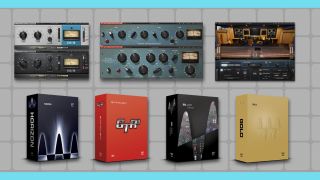 Yep, you read that right, Waves is currently offering silly discounts on some of its most popular and best-selling plugins and bundles.

The plugin manufacturer has become one of the biggest on the planet since launching their first piece of software in 1992. Ever since, they’ve been providing pro musicians and bedroom producers alike with quality analogue hardware emulators and unique processors and effects.

Waves’ monster sale is underway and it could be your chance to load up on some new software and supercharge your production.

Deals include $100 off the awesome new Abbey Road Studios 3 and $130 off Waves Tune Real-Time tuning for vocalists. Elsewhere, you can enjoy a massive $500 off the plugin stacked Gold bundle or bag the SSL 4000 Collection for just $299 (that's $500 off the original price).

These prices not low enough for you? If you’re shopping for solo plugins, buy two and get a further 25% off the second one, buy 5 and get 30% of the third and fifth, or get 35% off your sixth plugin and beyond.

We don't know how long this sale will last, and prices are changing quickly (going up and down), so we've dug deep and selected some highlight...

Abbey Road Vinyl: was $249, now $49 @Waves
Give your music the vintage warmth of vinyl records played on classic turntables and needles with this precise model of Abbey Road Studios’ vinyl cutting and playback gear.View Deal

CLA-76 Compressor/Limiter: was $249, now $39 @Waves
If you’re recording drums, this is the one. Inspired by two highly-desirable revisions of the famed mid-60s Class A line level limiting amplifier, both versions of the CLA-76 (‘Blacky’ and ‘Bluey’) offer the superfast attack that made the originals studio legends.View Deal

API 2500: was $299, now $69 @Waves
The API 2500 is a versatile dynamics processor that lets you shape the punch and tone of mixes with accuracy. With both ‘feed back’ and ‘feed forward’ compression types, the API 2500 boasts a wide range of musical parameters, making it an engineer's favorite.View Deal

PuigTec EQs: was $299, now $69 @Waves
The PuigTec EQP-1A is a top replication of the original hand-crafted EQ unit owned by iconic producer/engineer Jack Joseph Puig (U2, Rolling Stones, Lady Gaga) and heard on dozens of popular recordings by Weezer, Black Crowes and many more. View Deal

J37 Tape: was $299, now $49 @Waves
Waves collaborated with Abbey Road to present the J37 tape saturation plugin, a precision model of the machine used to record many of the greatest masterpieces in modern music. Controls include Tape Speed, Noise, Wow and Flutter.View Deal

CLA Classic Compressors: was $599, now $89 @Waves
Bag yourself four compressors that have been used on music from Green Day and Peter Frampton and James Brown, and are considered true classics by audio engineers around the world.View Deal

Waves GTR3: was $129, now $49 @Waves
A must-have for recording guitarists. For GTR3, Waves sampled modern and vintage amps from Fender, Marshall, Mesa Boogie and Vox to help you achieve the most amazing tones using just your guitar and a computer.View Deal

Waves Diamond: was $2,999, now $499 @Waves
Want access to over 65 powerful audio mixing and mastering plugins? Diamond includes every tool you’ll need in the studio, from dynamics, EQ and reverb, to pitch correction, spatial imaging and beyond. View Deal

SSL 4000 Collection: was $749, now $299 @Waves
This collection offers all the power of the original SSL 4000 mixing console. Featuring the G-Channel, SSL E-Channel, SSL G-Master Buss Compressor and SSL G-Equalizer, your music will sound so great it will feel like you’re working with a real SSL 4000.View Deal