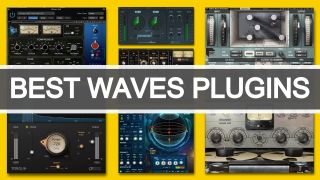 Once the individual elements of a song have been recorded, programmed and arranged in your digital audio workstation, it’s time to make the mix sound as good as it can. Thankfully, today’s all-powerful mixing plugins – ranging from virtual recreations of classic outboard processors through to ultra-modern tools – are on hand to facilitate this delicate balancing act. The best Waves plugins we've listed here represent great additions to your home studio tool kit.

Though your DAW comes bundled with adequate mixing effects already, it pays to own a selection of more premium third-party offerings, and anyone looking to fork out and fill their plugins folder will be familiar with top-drawer developer Waves.

With an ever-growing roster of analogue emulations and newfangled gadgets, it can be tough to know which Waves plugins to throw into your virtual shopping cart – which is why we’ve curated a handful of our favourites from the Israeli DSP mavens. We've tested all the plugins featured here too, so don't forget to read our reviews before you buy.

These are the best Waves plugins you can buy

Phase alignment isn’t the sexiest mixing subject, but get it wrong and your mix will suffer. When two recordings of the same signal (from, say, a multi-miked drum kit) don’t line up perfectly, the waveforms may partially cancel each other out, resulting in phase cancellation and nasty comb-filtering artefacts.

Phase problems are generally avoided at the initial tracking stage, but if you do have to fix alignment issues come mixdown time, Waves’ clever InPhase plugin can correct them in ways other plugins can’t.

The plugin comes as eight ‘components’, each used for slightly different phase-correcting scenarios: mono and stereo instances of the ‘main’ version; ‘LT’ light mono and stereo versions; and four ‘Live’ latency-free versions of the aforementioned components.

InPhase is predominantly designed for three scenarios: nudge the phase of two mono tracks (say, a DIed and amped guitar signal), shift the left and right channels of a single stereo track (useful when mastering, for example) and align a stereo track to a sidechain source (eg, for locking stereo drum overheads to a snare top recording).

Phase is visualised via the dual waveform displays and correlation meter. Using these as a guide, you shift either track’s phase manually earlier or later in time. If more complex, frequency-specific alignment is required, you can also reach for the onboard all-pass filters.

As you’d expect from the most comprehensive phase-alignment plugin out there, InPhase comes with a bit of a learning curve. Once mastered, however, it’ll become your go-to problem-solver for fixing out-of-phase audio.

Waves are no strangers in this department, having released various bass enhancement tools in the past, but Submarine could be their best yet. Using their proprietary Organic ReSynthesis tech, Submarine analyses the incoming audio’s carrier, pitch, formants and dynamics, then uses this information to generate two independent sub-bass signals, one and two octaves below the original pitch.

While there aren’t loads of tweakable parameters on Submarine’s front panel, there are enough to tailor things to taste: use the Min and Max sliders to restrict the span of triggering frequencies at the input; sum the new sub content to Mono for stereo compatibility; customise Dynamics with a one-knob compressor; and dial in harmonic distortion with the Drive knob. An onboard EQ and envelope follower would be nice additions for extra tone- and dynamics-shaping, but aren’t sorely missed.

As you’d imagine, Submarine particularly excels at bolstering low-end instruments such as kicks and basslines, adding clean and defined low end where needed – but the plugin also comes in useful for fattening breakbeats and beefing up special FX. A must-own for sound designers and sub-bass junkies.

Drums are the backbone of any track, and although they don’t always have an obvious pitch, correct tuning is vital nonetheless. Fail to tune your drum kit properly before hitting record, and you’ll have a nightmare repitching them to fit the rest of your music.

Enter Torque. Adopting the same Organic ReSynthesis technology found in Submarine, this unique “drum tone shifter” plugin tracks the input signal’s amplitude, carrier and formant content, allowing you to shift the drum hit’s pitch in real time, with a degree of artefact-free cleanliness and precision unachievable through other means.

Operation is simple. Set the Focus slider around the drum hit’s fundamental or second harmonic on the display, then sweep the main Torque knob to retune. Threshold lets you home in on only louder sounds in a recording, while the Speed slider is used to adjust the onset of the shifting – if you want to keep the transient intact, for example.

Though extreme shifting will introduce noticeable artefacts, Torque generally preserves transient detail and tone at low to medium settings. And with zero-latency operation, the plugin is just as useful in live scenarios as in the studio.

A fully-featured delay plugin is an essential tool in any DAW-based musician’s toolbox, giving you the ability to create everything from straight-up repeats and wild dub echoes to modulation effects such as flanging and phasing.

H-Delay may be a decade old, but it's still one of the best Waves plugins around and still admirably holds its own compared to more modern peers. Delay time can be set in milliseconds, BPM or synced to your DAW’s tempo. There’s no ‘stereo’ effect as such, but you can flip the polarity of the left or right channels, or engage Ping-Pong mode for left-to-right action.

As part of their Hybrid Line of analogue-inspired tools, H-Delay has a hardware flavour in both its sound and simplicity of operation. Sweep or automate delay time, and the delay line’s pitch changes in real time, facilitating wobbling, dub effects. Dial in Modulation Depth and Rate to modulate time (and therefore the pitch ‘wobble’) with the onboard LFO, hands-free.

Need more analogue vibes? Engage the LoFi button for a downsampling-style tone, and ramp up the Analog knob to dial in outboard-esque noise and flavour.

H-Delay has an extremely broad sweet spot, and especially excels at high-feedback ‘dub’ and lo-fi echo effects. It’s not the cleanest-sounding plugin around, but stands out when you need a simple-to-use delay with analogue mojo.

Back in the day, the only way to apply reverberation to a recording was by playing said signal through a speaker in a reflective, reverberant room (an ‘echo chamber’), then recording the results with a microphone placed in that room.

One of the most famous echo chambers of all time is the one found at the iconic Abbey Road Studios’ Studio Two – an environment recreated by Waves in their Abbey Road Chambers plugin.

Abbey Road pioneered the STEED (Send, Tape, Echo, Echo, Delay) signal path, all meticulously modelled in Abbey Road Chambers. Impulse responses handle the reverb side of things, while speaker/mic models and a tape delay emulation complete the classic chain. For versatility, other rooms, speakers and mics can be swapped out, too.

For those seeking authentically vintage ambience unachievable with other plugins, this specialised spatialiser delivers on all fronts.

Developed with Grammy-winning producer/mixing engineer Andrew Scheps, this multifaceted channel strip brings together five modules – Pre, EQ, DS2 (gate), Comp and Gate – that can be reordered and tweaked to taste.

Flexibility is the order of the day here. Each module can operate in stereo, dual or mid/side mode; reordering is as simple as drag and drop; and you even get a bunch of Scheps-designed ‘Focus’ presets that highlight key controls for handy starting points.

And if this isn’t enough, you can also load one additional Waves plugin from your collection anywhere in the signal path – including another instance of Scheps Omni Channel! Meta-level usefulness indeed.

Another Grammy-winning engineer collab, this time created alongside Andrew Brauer (Coldplay, Florence & The Machine), Waves Brauer Motion is a “circular stereo auto-panner” that not only automatically moves your source signal back and forth in the left-to-right ‘2D’ field, but also employs psychoacoustic trickery to manipulate front-to-back motion.

In a nutshell, two independent, identical panners can be LFO-modulated around the colour-coded spherical display in unusual ways. Triggers (including an external sidechain signal) define the motion’s start, stop and change in relation to the input signal.

Unusually for an auto-pan plugin, there’s also a basic Dynamics section, with input boost (via the Drive knob) inducing distortion. A tone-shaping Filter is onboard, too.

While Brauer Motion could be considered overkill for bread-and-butter left-to-right effects, it’s probably the most fully-featured and ambitious plugin available for stereo sound design. A real head-spinner.

+ Warm, analogue tone
+ Versatile controls to suit many types of source material
- Idiosyncratic controls take some getting used to

API’s 2500 is known to be one of the most versatile bus compressors around, and Waves’ official software recreation does a stellar job of emulating the original hardware’s revered design, behaviour and tone.

Like the original, this is a VCA design. The Tone section is where you choose between feed-forward or feed-back modes, and also like the hardware 2500, there’s plenty of scope for customising the input sidechain signal, with three Knee settings and a trio of Thrust options for unique ‘tilt’ filtering.

In use, the API 2500 often excels where other compressors can’t, imparting individual sounds, sub-mixes and masters with sculptable punch and ‘glue’, ably assisted by its array of customisation options.

Every producer needs a fully-featured parametric EQ on hand for surgical frequency-sculpting tasks, and they don’t come much more powerful than F6 Floating-Band Dynamic EQ.

Not only can its six “floating” bands be used for static boosts or cuts, but each is also dynamic, meaning that each can be turned into a frequency-specific compressor or expander, triggered by the level of the input signal (or via an external source).

You also get wet/dry options for parallel processing; a customisable FFT-based spectral analyser; and solo monitoring per band.

The sound of analogue tape can impart digital signals with much-needed warmth and character, which explains why tape emulation plugins are so… ahem, hot right now.

Classic tape delay effects can be dialled in, too: set Delay Time, switch between Slap and Feedback settings, and engage a low-pass filter – perfect for dubbed-out echoes and time-based effects.

Capable of everything from subtle tape smoothening through to crunchy saturation, this much-loved tape plugin is a go-to tool for imparting DAW-based signals with analogue warmth and ‘push’.