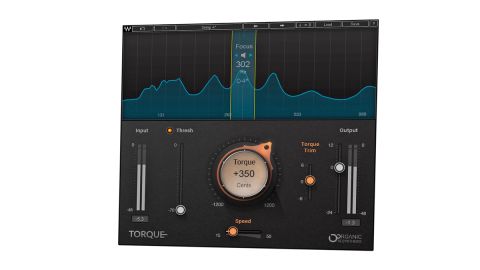 Better than regular pitchshifting and quicker than retriggering, Torque is a must for anyone regularly mixing drums.

Pitchshifting drums to get them in key with the track around them is often a hairy process.

Even the best software pitching algorithms can only shift kicks, snares and toms a short distance in either direction before the transients begin to suffer and the character of the sound changes, becoming increasingly less drum-like the further you go.

Waves reckons it has the solution to this particular problem in its latest plugin, Torque (VST/AU/AAX), which, it says, employs its new Organic ReSynthesis technology to facilitate manipulation of the pitch and formants of drum sounds without affecting their transients, duration, resonance and overall timbre. Organic ReSynthesis even gets its own logo on the UI, which suggests that Torque could be the first in a series of some sort.

Torque is very straightforward to use, with a clear and attractive interface comprising just five main controls and an Output volume slider. The first thing to do is aim the algorithm at the formant on which the pitchshifting should be centred with the Focus Area control, the workflow of which is described in In Focus, below.

With that done, twisting the Torque knob dials in up to 1200 cents of shift up or down in 5 cent steps - job pretty much done! The rest of the controls enable fine-tuning of a few key parameters that govern the action of the shifting algorithm.

The Threshold slider on the left sets a volume level below which no shifting takes place. This is useful for separating loud and soft sounds in the input signal - the snare and hi-hats in overheads, for example, or the main signal and mic bleed in any channel - and shifting only the former.

The Focus section at the top of the Torque interface is where you select the tonal component of the drum sound that you want the Organic ReSynthesis algorithm to target for shifting.

The Focus display looks like a regular spectrogram, but is actually a formant analyser, scaled from 98-988Hz and revealing the resonant energy in the input signal via an obvious peaking curve. Slide the Focus Area (the vertical column) left and right to hone in on the biggest peak and you’re all set. Generally speaking, said peak will be the fundamental frequency, but Waves suggests that the second harmonic is always worth trying, too, as is experimentation across the full range.

The frequency and note pitch of the selected range are displayed in the Focus Area, and clicking and holding the loudspeaker button while dragging (or not) band-pass filters it for solo monitoring.

The Speed and Trim sliders adjust the time the shift takes to happen (5-50ms) and the volume level of the shifted signal in relation to the input. Speed can be used to hold off the change in pitch until after the attack stage of the drum, or make it happen instantly; and Trim is handy when it comes to compensating for changes in loudness occurring as a by-product of the formant shifting process.

Torque does a superb job of retuning drums, being decidedly more transparent and realistic than conventional pitchshifting, and admirably quick and easy to apply. Transients hold up very well indeed, no matter how high or low you go, and the body of the sound maintains its integrity, depth and weight. It’s not always perfect, though, and noticeable artefacts can start to creep in at the extreme ends of the Torque range, depending on the tonality of the source sound.

The narrow targeting system of the Focus section implies that Torque is mainly intended for use on separate drum multitracks, with the Threshold control offering basic separation of elements within overhead tracks. Nonetheless, we got usable results with it on full kit mixes and loops, too. Processing anything but drums with it rarely yields anything of value, however - it’s clearly been tuned specifically to percussive envelopes and timbres.

In short, Torque makes light work of tuning acoustic and electronic drums, having an effect as close as we’ve ever heard to cranking lugs on the real things. Highly recommended.