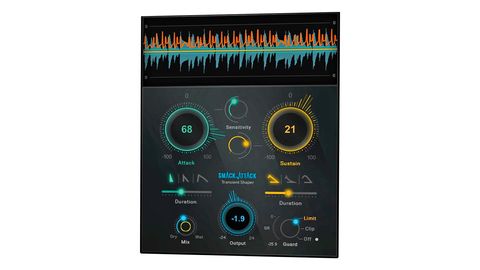 There are plenty of superb transient shapers out there, but none have quite the same level of finesse as Waves’ colourful new take on the concept.

A so-called “secret weapon” for mixing drums and other percussive instruments, Waves’ painfully-titled new transient shaper plugin (VST/AU/AAX/RTAS) is a spiritual successor to their classic Trans-X, with a few clever tricks up its sleeve.

Like any transient shaper, Smack Attack enables independent boosting and/or attenuation of the attack and release portions of the transients in the incoming signal - the hit of a drum, pluck of a string, etc - in order to give it more or less impact and punch. However, it’s in the detection of those transients and shaping of the gain control envelope that Smack Attack really sets itself apart.

The amount of gain reduction or increase applied to the two transient portions is determined by the big Attack and Sustain knobs. Used on a drum loop, for example, with Attack at 100 and Sustain at -100, you get extremely pronounced initial hits with hardly any tail; while with Attack at  -100 and Sustain at 100, the release comes to the fore and the hit drops back, resulting in a pumping, sucking sound that comes across as if each hit is ducking itself.

That is, of course, standard functionality for this kind of plugin, but an extra dimension of control is introduced by the Attack and Sustain Sensitivity dials, which let you set amplitude thresholds above which identified transients will be processed. By lowering the Sensitivities (thus raising the thresholds), you could, for example, take some bite out of only the loudest kick drum hits in a loop, ensure that mic spill in a multitrack kit doesn’t get boosted along with the main signal, or get scientific with the processing transparency.

Helpfully, all of this - and the effects of every other control, too (see Throwing shapes) - is visualised in the excellent real-time display, which shows the input as a blue waveform, gain changes as a continuous orange line, and Sensitivity thresholds in green and yellow.

Smack Attack offers loads of control over the shape of the Attack and Sustain envelopes. Under each gain knob are three Shape buttons, each one establishing a particular level modulation profile. The first two Attack Shapes (Needle and Nail) are designed with drums in mind, boasting a very fast rise/fall and two angles of recovery slope; the third (Blunt) is slower at both ends, intended for other instruments. The Sustain Shapes comprise Linear, Non-Linear and Soft Linear. The curve of Non-Linear is affected by the Sustain level, and Soft Linear is again intended for use on non-percussion sources. The lengths of the Shapes are adjusted with Duration sliders: 0.5-500ms Attack, 30-1000ms Sustain. With such a fine degree of envelope control, Smack Attack really does take you to places other transient shapers can’t, although you’ll have to put a few more mouse clicks in to get there!

At the final output, the Guard control activates a Limiter or Clipper (or neither), for preventing overloads relatively transparently or smashing them into the roof.

Both have a ceiling fixed at -0.1dBFS, and an animated collar provides metering of gain reduction (or overs when Guard is set to Off). The Mix knob, meanwhile, brings parallel processing into the picture, allowing extreme transient boosts to be blended with the dry signal for a hearty alternative to New York-style compression.

It’s a hugely effective feature that we’re surprised isn’t built into more transient shaping plugins. Apart from the lack of a multiband option, as included with Trans-X, we can’t really fault Smack Attack.

The Sensitivity and Shape controls are fantastic for detailed defining of transients, the display is genuinely assistive, the Mix control is joyous, and coming from Waves, it almost goes without saying that the sound quality and precision are exceptional.

Despite the percussive slant of the marketing blurb, drums are by no means the only valid target for it, either - it does a sterling job of fronting up (or down) basses, pianos, guitars, synth plucks, and anything else with a transient component. Probably the deepest transient shaping effect ever committed to code, Smack Attack requires a bit more engagement than other equivalent plugins, but the results it delivers are well worth the effort.