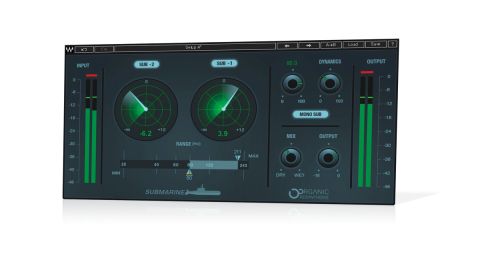 Submarine makes adding perfectly tracked, huge-sounding subs to your kicks and basses a piece of cake.

Singular in its purpose, Waves’ new plugin effect generates sub-harmonic signals based on the dynamic and tonal characteristics of the input signal.

The most obvious source candidates for Submarine, (VST/AU/AAX) are basslines and kick drums, but anything below 240Hz that needs underpinning with low-end energy is potentially viable.

To be clear, Submarine isn’t an octaver, simply duplicating the input signal at a lower register through pitchshifting, or an analogue-style synth tracking the input’s pitch but generating an entirely independent signal. In fact, it’s somewhere between the two. The subs are created using Waves’ Organic ReSynthesis engine (ORS), which deconstructs the input and resynthesises it in terms of four sonic elements: carrier, pitch, formant and envelope. Two subs are generated in parallel, the first an octave below the input, the second two octaves below.

Putting the plugin to work is a quick and easy process. The first thing to do is turn one or both Subs on and set the span of frequencies within the input signal that will trigger them by dragging the Min and Max Range sliders. With each of these at its most extreme position, full coverage is 20-240Hz, and by setting the Dry/ Wet Mix to 100% wet, it takes no time at all to narrow that down to the desired range.

Submarine is incredibly straightforward to use, but it’s also easy to go overboard with it, particularly if you’re monitoring through speakers incapable of actually reproducing everything it’s doing. If that describes your home studio setup, the importance of using a spectrum analyser with Submarine can’t be overstated - Sub -2 runs very low indeed, and guesswork really isn’t going to cut it.

Also crucial to the quality of the end result is setting the Range sliders correctly. You should aim to capture all of the actual notes in your source instrument with Max and control the bottom frequencies of the subs with Min.

Finally, we’d strongly warn against using Submarine on more than one track at a time - or perhaps two if one is a kick drum, the other is a bass, and the two are either quite disparate in their frequency content and/or don’t hit at the same time. Sub bass frequencies soon build up...

From there, it’s just a matter of adjusting the level of each Sub with its groovy ‘sonar’-style knob to taste. Depending on the sound you’re bolstering and the speakers you intend it to be played back on, you may well find that Sub-2 is too low to be of any real use. That’s to be expected, as dropping bass-heavy sounds by two octaves is often ill-advised, but cinematic sound designers and producers of music likely to end up on big club systems will no doubt be champing at the bit.

Submarine doesn’t give you access to any of the resynthesis parameters at work under the hood, but there are three points of adjustment at the output. First, the stereo plugin (like all Waves effects, both mono and stereo versions are included) can be toggled to output the Subs in mono - ideal for keeping the wild stereo basslines that the kids are into these days in check. Then there’s the Drive control, which dials in harmonic distortion for rather splendid warming and presence-enhancement as it’s raised, culminating in a subtle increase in bite and edge; and a one-knob compressor (Dynamics) for increasing weight and sustain.

Thanks, presumably, to ORS, Submarine’s particular style of additive sub-harmonic conjuration sounds amazingly natural and cohesive - like a very specifically filtered version of the source material. Given the simplicity of the Sub signals, there’s not a great deal that could realistically be added to the interface beyond the Drive and Dynamics controls, but an input-triggered amp envelope and a bit of post- Drive EQ could have proved handy. That’s a very minor complaint, though, and certainly not one to dwell on.

With its focused, instantly effective workflow and sound, Submarine is a formidable low-frequency weapon for dance music producers and sound designers.