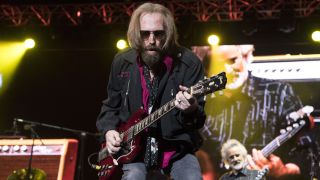 Tom Petty, revered US songwriter and frontman of Tom Petty and the Heartbreakers for four decades, has died aged 66.

He was found unconscious at his Malibu Home, having suffered a cardiac arrest. The singer and guitarist was taken to UCLA Santa Monica but declared dead at the hospital.

Long-time manager Tony Dimitriades confirmed the death in a brief statement on behalf of the star's family. "He died peacefully at 20:40 Pacific time (03:40 GMT Tuesday)," the statement read, "surrounded by family, his bandmates and friends."

Born in Gainesville Florida on October 20th 1950, Petty rose to fame with the Heartbreakers after a breakthrough UK tour in 1976. By the end of the '80s he was a well-established member of the US rock elite, and the Heartbreakers were inducted into the Rock and Roll Hall of fame in 2002. Hits such as I Won't Back Down, Free Fallin' and Runnin' Down a Dream remain radio mainstays.

Bob Dylan spoke to the LA Times. "It's shocking, crushing news," he said. "I thought the world of Tom. He was great performer, full of the light, a friend, and I'll never forget him."

Other tributes from fellow musicians and fans are pouring in.

RIP Tom Petty. Thank you for a lifetime of inspiration. Your music made the world a better place and we were lucky to have you. pic.twitter.com/kD2NPkBH7pOctober 2, 2017

I loved Tom Petty and I covered his songs because I wanted know what it felt like to fly. “you belong somewhere you feel free.”💔October 2, 2017