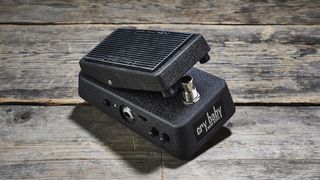 It's the best wah pedals creating that 'talking' sound you've heard on famous electric guitar recordings from iconic players such as Jimi Hendrix and Richie Sambora. Want specific examples? Listen to Hendrix's intro on Voodoo Child, or Issac Hayes' theme from Shaft to get a flavour of the wah-wah pedal in action. In fact, for guitar players seeking to express themselves in a super-cool way, no guitar effects are more legendary than this one.

Before we unveil our expert pick of the best wah pedals (of which we have tested so, so many over the years), do you know how a wah-wah can change your overall guitar tone? In a nutshell, the tone is changed using the wah's rocker pedal: bassier sounds are found at the heel-down setting, while treble-y tones are at the toe-down. It’s this transition between extremes that produces the vocal-style sound that we know and love.

Many guitarists enjoy a spot of ‘cocked’ wah too, where the rocker is kept in one position, most commonly around the mid-frequency, to help guitar solos cut through the mix. However you choose to use your wah pedal, you're in for a whole world of fun when adding it to your pedalboard.

When it comes to the best wah pedal overall, the Cry Baby has become an industry standard. The compact Dunlop Cry Baby Mini 535Q incarnation is the king of the wah pedals, delivering everything you'd expect from its bigger brother, without taking up valuable room on your pedalboard. On-board you'll find a red fasel inductor for more vintage voicing, plus extras to help you tailor your wah sound.

The pedal presents four frequency ranges, enabling you to go from bassier to trebly sweeps, while a Q knob can be used to tweak the intensity of the effect. If you're a keen soloist, the boost switch engages up to a 16dB lift to give your leads some extra oomph.

The best wah pedals: what you need to know

Given the relatively simple nature of the wah effect, there’s a dazzling array of options available when it comes to the best wah pedals. Yet, although the mechanics of wahs have remained largely unchanged over the years, recent times have seen the bulky, weighty enclosure trimmed down to produce a number of mini guitar effects pedal formats.

In the classic wah design, which is epitomised by the Dunlop Cry Baby, the rocker itself is attached to a mechanical control pot, but these can wear out and require replacing over time, prompting some companies to employ an optical pot, which uses sensors for longer life. You’ll find this amongst Morley’s offerings.

Investing more cash in a wah opens up additional tonal options. So while basic wahs such as the Electro-Harmonix Wailer Wah don’t have any settings to adjust, more upmarket offerings from Xotic and CAE often feature adjustable frequency ranges and boosts to help tailor the tone to your liking. It’s worth noting that these controls are sometimes found inside the pedal.

Wah purists will swear by pedals equipped with an inductor, which were commonly found in vintage models and come in three main variations: Halo, as found in the Hendrix and Clapton-used 1966 Vox Clyde McCoy wah; red fasel, which crops up in a number of Cry Baby variants; and yellow fasel, which you’ll find in other vintage-voiced designs.

Dunlop’s CAE Wah even features both red and yellow fasels. You’ll need to fork out more cash for these particular best wah pedals, but they produce a sweeter, mellower voice than the more aggressive sweep of many modern designs.

If you're keen on saving pedalboard space, you may prefer a combined wah and volume pedals, as these offer both types of effects in a single pedal. The Hotone Soul Press is a prime example of this kind of combi pedal.

Still undecided? Then dive into our guide to the best wah pedals for all types of guitarists now, whether you're a beginner electric guitar player or someone looking to add to their high-end electric guitar setup for a truly pro sound.

The best wah pedal for versatility and portability

The Cry Baby is an industry standard the world over, but this latest mini incarnation offers enough variation for all players while taking up minimal pedalboard real estate. There’s a red fasel inductor onboard for vintage-voiced wacka-wacka, as well as a host of extras to tailor the wah to your own personal preferences.

Key among these is the option of four frequency ranges to go from bassier to more trebly sweeps, while a Q knob adjusts how intense the effect gets. Soloists will be pleased to note the boost switch, too, which engages up to a 16dB lift to really make those leads soar.

The best wah pedal for guitarists on a budget

The Wailer Wah is essentially EHX’s take on the Cry Baby, but with a number of contemporary tweaks. Chief among these is obviously the price, but the company has also cut down on the weight, which makes for an easier-to-lift pedalboard.

Crucially, the tone has been given an overhaul, with the high-end-focused sweep of lower-priced wahs replaced by a smooth, round transition between bass and treble, and an intense, almost synth-like quality. It still utilises the ol’ rack-and-pinion mechanical approach, which you can certainly feel underfoot, but the bang-for-buck tonal ratio outweighs any minor misgivings regarding the feel.

This perennial and affordable favourite is still going strong

There’s no mistaking the chrome trim of the Vox V847 - along with the Cry Baby, it’s a pedalboard staple the world over, and that’s primarily down to two things: its price and its simplicity.

True, there are no bonus features here, and the battery access isn’t ideal, but its satisfying weight keeps it rooted to the spot, while the mechanism is smoother than many of its competitors. Crucially, the tone is there, too, with a redesigned inductor that aims to ape the original, as used by Page and Hendrix, and a buffered input to keep your tone in check.

The best wah pedal if you want a switchless type

Morley is renowned for its range of spring-loaded, switchless wahs - that means you don’t have to engage the pedal with a footswitch; you simply place your foot on the wah and get to work when you want to get funky. That does mean it’s buffered rather than true bypass, however, and cocked wah tones are out of the question for all but the most sure-footed of players.

Still, this Steve Vai signature model is a fine example, with an especially vocal sweep and plenty of midrange, while an added Contour mode gives you the option of adjusting the frequency and tone. Plus, with Morley’s electro-optical design, there’s no chance of you needing to replace the pot down the line.

There have been many iterations of the Cry Baby over the years - and many versions of the lowest-priced wah in the Dunlop catalogue, the GCB95, to boot - but the latest is perhaps the best. It now comes fitted with the red fasel inductor found in various vintage wahs for a sweeter sweep, while a 100k ohm Hot Potz potentiometer makes for some of the smoothest wah-ing in the biz.

Sure, you’re not getting adjustable sweep, boosts or anything else, but the GCB95’s aggressive sweep makes it one of the best wahs for cutting through swathes of distortion.

The best wah pedal for authentic Hendrix and Clapton tones

Still widely regarded as the finest recreation of the original Vox Clyde McCoy wah - which was the very model employed by Jimi Hendrix and Eric Clapton - Fulltone’s Clyde Standard employs a hand-made halo inductor, with an added internal resonance control to adjust bass and gain.

It’s an improvement on the original, too, with lower noise, more consistent construction and a long-life wah pot - the latest versions of the pedal also boast a switchable booster/buffer control for fuzz-friendly operation. When it comes to the real, well, McCoy, it doesn’t get better than this.

One of the most flexible wah-wah pedals you can buy

Dunlop’s Cry Baby design team partnered with Custom Audio Electronics’ rig design legend Bob Bradshaw for this all-encompassing wah. Not only does it include both red and yellow Fasel inductors to change the resonance of the sweep, but there’s also a built-in MXR MC401 Boost/LineDriver.

Both of these options can be switched on the fly via the pedal’s side-mounted kickswitches, while there are also internal pots for Q and gain tweaks. A long-life CTS pot, true bypass and LED indicators round out the impressive spec.

Want wah, volume and expression? This is your best wah pedal

Slightly larger than the Cry Baby Mini, the Hotone Soul Press is a rarity in the wah world in that it offers wah, volume and expression capabilities. Its tone recalls the Cry Baby, but it has a throatier, fuller-voiced sweep that strikes a sweet spot between high- and low-end resonance.

It should be noted that the sound is far from subtle, which makes it a great shout for distorted leads, but not so much for vintage wah aficionados. It also has a fair short travel, which isn’t ideal for the large of foot, but the perfectly functional volume and expression modes make it more than worth the asking price.

The most versatile vintage-style wah pedal

For the glam-looking XW-1 Wah, US boutique co Xotic Effects sought to nail the sound of the much sought-after original Clyde McCoy, courtesy of a halo inductor. The versatility factor is considerably upped with the addition of bias, wah-Q, treble and bass controls, with the EQ knobs offering up to 15dB of boost or cut.

There are even internal controls for input gain, plus internal dip switches to adjust the wah resonance frequency range. You also get relay-based true bypass switching, a slightly downsized enclosure over standard wahs, a buffering circuit for use with fussy fuzzes, adjustable rocker tension and a self-lubricating nylon bushing pivot to reduce squeaks.

An all-analog wah-wah that stands out from the crowd

The all-analog PW-3 sits somewhere between traditional and mini Cry Babys in terms of size, and its die-cast chassis marks an aesthetic departure from the crowd. Its tone sets it apart, too, with a choice of two distinct wah sounds past and present.

Vintage dials in an approximation of the Hendrix/Clapton sounds of yore with a drop in low-end, but switching to Rich retains the bass frequencies and boosts the output for a throaty sound that begs to be matched with lashings of gain. There are better options for both individual sounds, but it’s the combination of the two that earns the PW-3 a slot here.