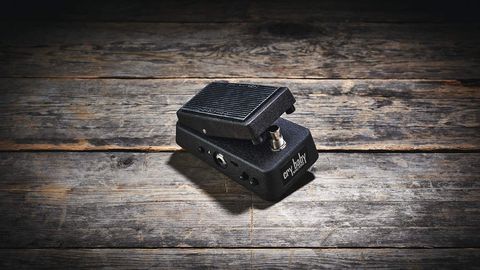 Full-grown tone from this bonny baby.

With players wanting to cram ever more on their ’board, ultra-compact pedals are in demand and companies have already responded with mini and micro pedals that take up little space but still provide the same sonic capabilities as their larger siblings.

Now, if your interaction with a pedal is a simple matter of stomping on a footswitch here and there it may not matter one jot if its footprint is tiny - but would miniaturization work just as well with a treadle-style pedal that normally relies on a substantial contact area? We found out with this iteration of the iconic Cry Baby wah pedal that’s half the size of the original.

Fitting the minimal Cry Baby circuitry in a smaller chassis is no problem and the Mini offers the same red Fasel inductor as its bigger-brother 535Q model, as well as most of its feature set. The six selectable frequency ranges have been cut down to four here but still offer users plenty of leeway in setting up the pedal to personal taste, in conjunction with the Q knob that sets the width of the bandpass for emphasising higher or lower harmonics. There’s also the option of up to 16dB of boost when you press down on the toe to engage the pedal.

Sound-wise, this is classic throaty Cry Baby with little difference from a full size pedal through the treadle travel. Operationally, the fact that the Mini is slightly less wide than a full-size version makes no difference but, as it is half the length, planting your heel close to the rear/lower end of the treadle, (the only way to successfully operate a wah), means that some of your foot will be extended unsupported beyond the front end.

While that may initially feel a little odd to full-size treadle aficionados, it’s actually a practical compromise that is unlikely to raise any issues unless you want to play the intro from Theme From Shaft all night long...

There's not as much support for your foot but that’s a valid trade-off to get a tonally versatile wah that will fit into a tight space.