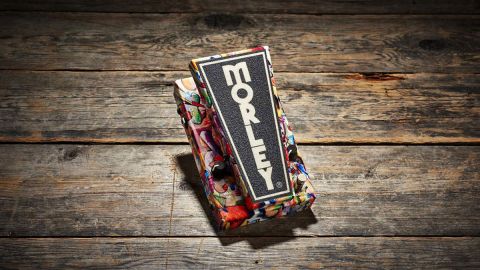 The Steve Vai Bad Horsie wah has always been a huge pedal - from the 22-year-old original to the newer Bad Horsie 2 - so  a smaller version is a most welcome addition to Morley’s roster.

Limited to just 500 pieces, this new pedal features Vai’s own artwork. And it’s a psychedelic looker that would brighten up the most mundane of pedalboards, both in bright daylight or on a darkened stage where the luminous logos on the front and on the treadle come into their own.

As is the tradition with Morley wahs, it features electro-optical operation, so there’s no pot to get scratchy and eventually replaced. Operation is different from traditional wahs, too - this one is spring-loaded and starts operating as soon as you press down, rather than having to press down on the treadle toe to activate a footswitch. Take your foot off and it will spring back to its bypass mode. We like the way this works, but players steeped in traditional pedals may need to adjust their technique. If you like a boost in volume when you engage the pedal, there’s also a volume knob with loads of extra gain.

The pedal’s default mode is set to Steve Vai’s preferred tone and sweep (the same as the original Bad Horsie), and it’s a nicely expressive classic wah with plenty of chewy midrange - particularly vocal with distortion sounds. However, there’s also a footswitchable Contour Wah mode where you can shape the effected frequencies with a Contour knob, greatly increasing the wah options from subtle and subdued to gnarly with a strident peaky top end with the toe down.

It’s is a lot of money for a wah, but then it’s a lot of wah for the money... It also has a very practical design with a small footprint and that ultra-cool spring-loaded operation (if that appeals, but you’re on a tight budget, try the Mini Maverick Switchless Wah at £169). You also get a wah experience that’s been painstakingly perfected by Steve Vai, complemented by the flexibility of the Contour mode for a range of alternative wahs.